A recent report published by Global StatCounter (via 9to5Mac) suggests that even though Google’s Android OS has been showing rapid growth since the beginning of this year overtaking BlackBerry and even surpassing iOS in August (though only for the remainder of that month), it hasn’t been able to catch up with the growing popularity of iOS. The statistics from the report reveal that Apple’s iOS has increased its lead over Android for the month of November, while Symbian remains the most commonly-used mobile operating system globally. 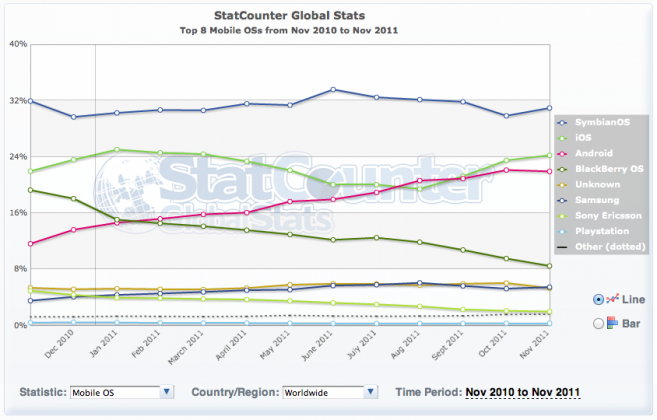 Apple’s lead should be viewed in the light of pent-up demand and the successful iPhone 4S launch, which sold four million units during the launch weekend. Symbian remained the leading mobile OS with a 30.95 percent share (up from 29.84 percent in October), while BlackBerry OS recorded another loss, dropping from 9.49 in October to 8.44 percent in November.

Looking at just mobile browsers, Global Statcounter pegged Android at 20.41 percent share in November, down from 20.88 a month earlier, while iOS grew from 18.78 to 19.53 percent share.

Another statistical report by Net Applications confirms the above mentioned mobile browser trends reflecting both Android and Apple are losing some shares to other OS platforms. iPod touch, BlackBerry and Nokia all lost mobile browsing share in November and Opera remained the most commonly-used mobile browser, going from 21.52 in October to 22.49 percent share in November. This suggests that users are increasingly spending more time accessing the web through mobile devices at the expense of desktop computers.