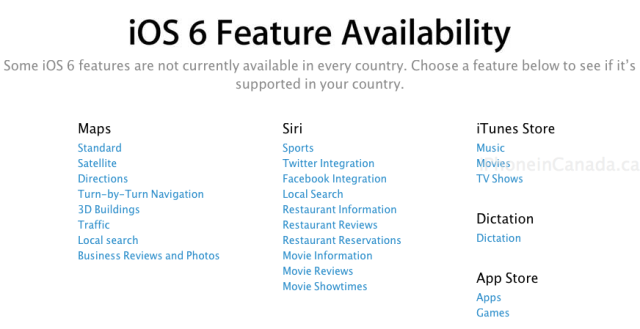 Apple has posted an iOS 6 Feature Availability page that denotes a list of countries where specific features are available in Maps, Siri, iTunes Store, Dictation and App Store:

Some iOS 6 features are not currently available in every country. Choose a feature below to see if it’s supported in your country.

Out of the 24 specific features listed, Canada is listed in every single category except for 3D Buildings, where the USA remains the sole country. Although Canada isn’t listed, users have spotted cities such as Toronto and Montreal in 3D, so expect this to slowly expand.

Canada is listed with just the USA and Mexico under Siri’s Restaurant Reservations feature. We are also part of a small group of countries for other Siri features such as Movie Showtimes, Movie Reviews, Movie Information, and Restaurant Reviews/Information.

Even though Siri was handicapped in its initial Canadian launch with the iPhone 4S, iOS 6 does the right thing and puts Canada into elite status for features (we’re also part of the first wave of launch countries). Consider ourselves lucky, eh?