Apple’s move to distance itself from Samsung may have serious consequences in the long term, such as the breaking up of Asia’s most dependable economic relationships, reports the Wall Street Journal.

Factory output from South Korea and Taiwan long has moved almost in lockstep as both have helped meet global technology demand. But Apple is trying to reduce its reliance for parts on smartphone rival Samsung Electronics, and the iPhone 6 could pull Taiwan more firmly into a production orbit independent of Korea’s. 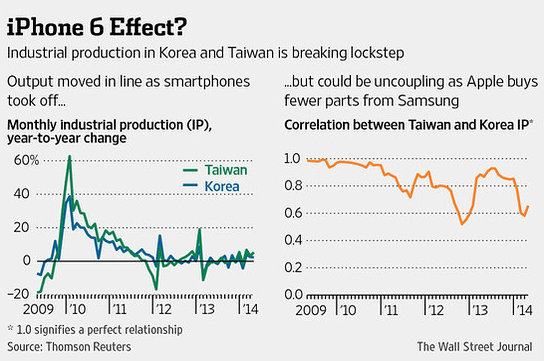 The fact is, Apple has started shopping for new partners in Taiwan — see the TSMC deal, for example — reducing its reliance on its Korean partners such as Samsung. It currently buys flash-memory chips from Toshiba, and it gets touch screens from Japan Display, LG Display, Sharp, and maybe Toshiba.

Since the TSMC deal went public, however, something has changed. Investors seem to be following Apple and are moving their investments from Korea to Taiwan. Just to throw in some numbers based on the WSJ: Taiwan’s industrial production index grew 5.2% on-year in May, followed by a rise in April and March. By comparison, Korea’s April production slowed to 2.4% on-year, down from 2.6% in March.