Back in July, we published a report claiming Apple’s iPhone 4 being Canada’s most popular smartphone with over 516,000 users. That number has been growing fast ever since and now, J.D. Power and Associates has officially released the results of their annual 2011 U.S. Wireless Handset Customer Satisfaction Study with Apple earning the top-spot for 5th consecutive time. Apple scored 795 on a 1,000 point scale with the iPhone while Motorola scoring 763 and HTC scoring 762 points. The report credits iPhone’s performance, ease of operation, operating system, features and physical design for its success over the competition.

“It’s not unexpected that satisfaction is higher for devices that have new technological advances or features. Having the right combination of physical dimensions and operating functions and features for both smartphones and traditionally equipped devices is key to creating an exceptional ownership experience with each type of wireless device.”

The Wireless Smartphone Satisfaction Studies 2011 were based on the following criteria:

These study measures customer satisfaction among smartphones owners who have used their current mobile phone for less than two years, by examining several key factors. In order of importance, the key factors of overall satisfaction with traditional wireless handsets are: operation (30%); physical design (30%); features (20%); and battery function (20%). For smartphones, the key factors are: ease of operation (26%); operating system (24%); physical design (23%); features (19%); and battery function (8%). 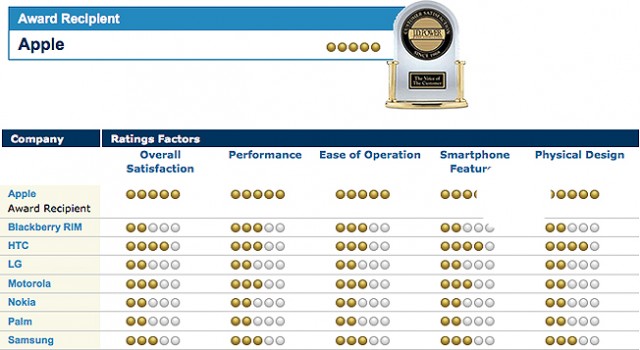