Yesterday saw a flurry of announcements (like iTunes 9, iPhone OS 3.1) by Apple in regards to their iPod line up. Some may see these changes as good, but some people are wanting more. I think the refresh is good for everyone as the prices got dropped and capacities increased. 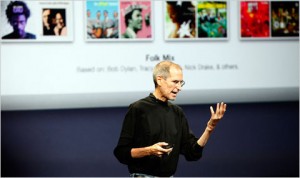 However, what got me confused was why didn’t Apple add a camera and mic to the iPod Touch? Instead, consumers got an iPod Nano with a camera (but no picture abilities) and other features? Let’s see what Steve Jobs had to respond in his interview with David Pogue from the NYT


Mr. Jobs reiterated what Phil Schiller, the marketing vice president, had said earlier in the onstage presentation: that Apple is really pitching the iPod Touch as a game machine these days. And to do that, you have to make it as inexpensive as possible.

â€œOriginally, we werenâ€™t exactly sure how to market the Touch. Was it an iPhone without the phone? Was it a pocket computer? What happened was, what customers told us was, they started to see it as a game machine,â€ he said. â€œWe started to market it that way, and it just took off. And now what we really see is itâ€™s the lowest-cost way to the App Store, and thatâ€™s the big draw. So what we were focused on is just reducing the price to $199. We donâ€™t need to add new stuff. We need to get the price down where everyone can afford it.â€

…and the answer to why the camera can’t snap pictures?

I also asked him why the Nano can record video, but canâ€™t snap still photos. That reason, he said, is technical: the sensors you need to record video are extremely thin these daysâ€”thin enough to fit into the wafer-thin Nano. But the ones with enough resolution for stills, especially with autofocus (like the sensor in the iPhone), are much too thick to cram into a player thatâ€™s only .02 inches thick.

Okay, so maybe you got us there Steve. Considering Apple right now is making a massive impact in the cellphone, MP3, and portable gaming market, they can pretty much do whatever they want. They can afford to only let tiny features be released, one small step at a time. Either way, I still love it when Apple does these media events–it’s always exciting to see what will arise (no iTablet yet, eh?).

What did you think of yesterday’s event? Good or bad?