Following the release of the third beta of iOS 8.3 to developers, Apple has updated its Beta Software Program page as well: if you are lucky enough, you may enrol and get early access to the upcoming versions of iOS (via MacRumors).

In line with an earlier report coming from 9to5Mac, for the first time ever Apple has allowed regular users to access a yet publicly unreleased iOS version. Although the public beta program seems to be limited, it kicked off with the third beta of iOS 8.3. If you are one of the early birds who signed up for the beta testing program, you may be able to download the version that was pushed out to developers not so long ago.

If you aren’t, you won’t find the iOS Beta tab on top of the page, but if you visit the FAQ section, you’ll see that it has been updated to answer questions related to iOS as well. 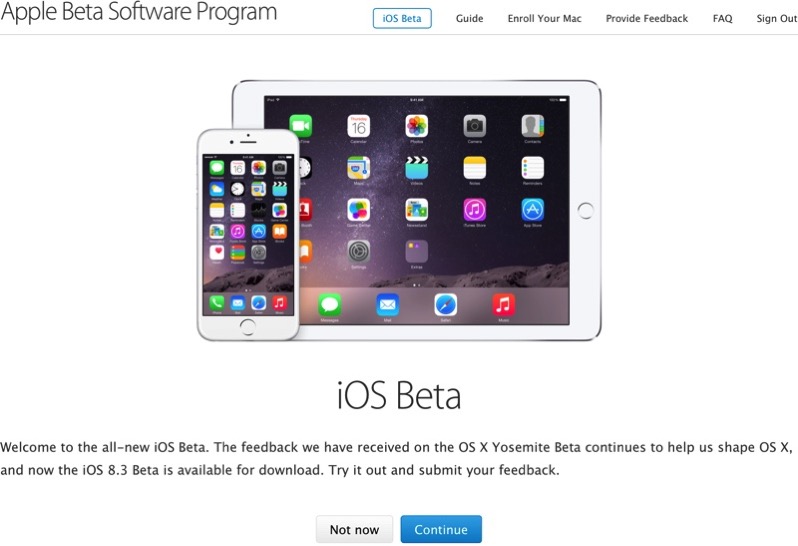 How do I get a shipping version of iOS back on my iPhone, iPad, or iPod touch?
Always back up your iOS device before installing beta software. To get a shipping release of iOS on your iPhone, iPad, or iPod touch, you can simply install the final version of the software you are testing when it appears in Software Update. If you would like to go back to a previously released version, you must first erase the beta software, then re-install the latest shipping version of iOS, and finally restore from your previously saved iTunes backup.

In an interesting move, Apple has released two betas to developers (back in February): iOS 8.2 and iOS 8.3. The first one was recently pushed out to the public, as it includes the Apple Watch app you’ll use to pair your iPhone with Apple’s most talked-about and yet unreleased product, the Watch. Now it is time to see iOS 8.3, which includes notable updates such as diversified emojis. Siri has been busy learning some new languages as well.

Google today officially announced its wired, second-generation Nest Doorbell. The company was originally expected to unveil a slew of new Nest devices at its Pixel launch event on Thursday, October 6. However, the wired Nest Doorbell leaked on Monday and reports indicated it would go on sale before Thursday's event. https://youtu.be/N_xfwAm79iY Google's new Nest Doorbell...
Nehal Malik
32 mins ago