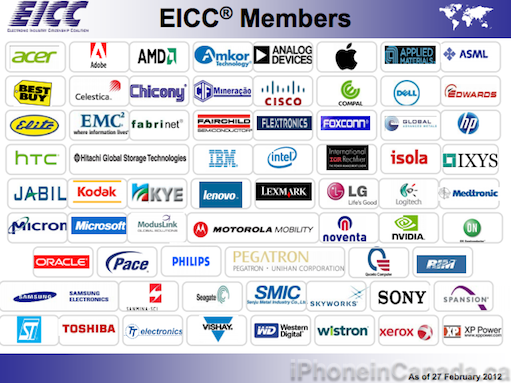 Nick Bilton for the New York Times writes a piece about the silence of other major tech companies when asked about working conditions of their supply chains:

In the last week I have asked Hewlett-Packard, Samsung, Microsoft and others about their reports on labor conditions. Most responded with a boilerplate public relations message. Some didn’t even respond.

The answer from Barnes & Noble, the maker of the Nook e-reader, was typical.

In contrast, it was just in late January the New York Times posted a scathing story about the working conditions of Apple’s supply chain, in which Tim Cook immediately responded to internally. Apple is the only tech company to join the Fair Labor Association, as announced as part of Apple’s 2012 Supplier Responsibility Progress report.

The results of FLA audits have resulted in both Foxconn and Apple agreeing to make changes to better the working conditions of their Chinese work force through pay raises and reduced overtime. Tim Cook’s recent trip to China also involved a visit to a Foxconn iPhone factory, as part of his efforts to support the betterment of supplier working conditions.

Apple and its rivals such as Microsoft, Dell, HP, and Samsung are part of the Electronic Industry Citizenship Coalition (EICC), but members aren’t required to disclose supplier factory audit reports, hence what critics claim have created a lack of transparency and accountability.

It isn’t likely we will be hearing about any supplier audit reports from Apple’s rivals anytime soon. There just isn’t enough media pressure to clamp down on companies such as Samsung, Microsoft and Dell. But if stories like this from the NYT continue to persist, that might change.

Taiwan Semiconductor Manufacturing Co. (TSMC), Apple’s primary chip supplier, will also produce advanced 4-nanometer chips at its $12 billion USD under-construction manufacturing facility in the U.S. state of Arizona — reports Bloomberg. The information comes from people with knowledge of the matter, who said TSMC will announce the new plan next week during a ceremony at...
Nehal Malik
26 mins ago