**Using an iPhone in Canada? Vote here to tell me where you are located!**

Remember when I posted about Apple hosting their SDK conference on March 6th? Well, it happened yesterday and boy did Apple announce some very interesting updates coming in the future. Let’s quickly summarize what was announced today, for those who haven’t read about it already.

Engadget was live on the scene and they have a very detailed account of the play by play (read up on it if you want more details). Don’t feel like reading through it all? Here is a summary of what we can expect soon for our precious iPhones, in an upcoming firmware update. These new features are catering to the business/enterprise crowd (they have been holding out on the iPhone): 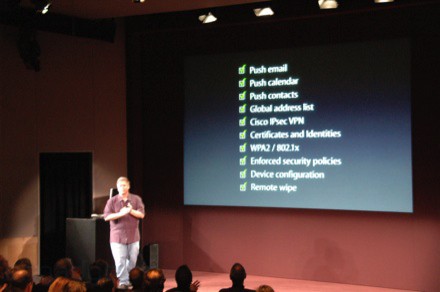 What about the SDK update?

Developers will pay $99 to access the Dev Program. Apps created will be available to download via a new AppStore program installed on the iPhone (similar to the iTunes store). Developers will get 70% of sales and 30% will go to Apple for costs involved with running the store.

Apple is making a kit that seems very easy and friendly to use for software developers. So get ready for some cool apps to come our way! I would love to see a native Skype app…as this would be awesome once you enter some free WiFi areas. =)

Samsung's annual Unpacked event is being held tomorrow, February 1st. Unveiling the latest flagship devices, including the Galaxy S23 series. It's likely that there will also be other surprises to be had. Here's how you can watch the digital live-streamed event and not miss a moment. Each year, Samsung hosts its Unpacked event and reveals...
Steve Vegvari
11 mins ago

Xbox, PlayStation, and Nintendo will reportedly be skipping E3 2023 as the large video game conference returns for an in-person event. Slated to run from June 13th to the 16th at the Los Angeles Convention Center, the three large publishers will not have a presence on the showroom floor, says a report. According to IGN,...
Steve Vegvari
42 mins ago