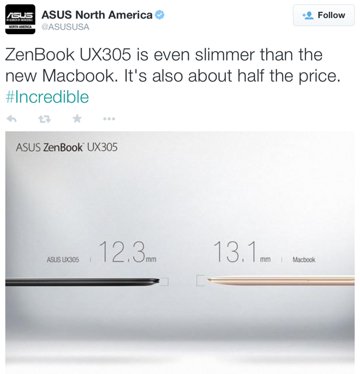 As pointed out by AppleInsider, Asus, Dell, Lenovo and other competing PC makers don’t seem much impressed by Apple’s all new MacBook, and are taking to Twitter mocking the company’s latest notebook for not being the slimmest, cheapest or highest-resolution on the market. Asus claims its ZenBook UX305 is even slimmer than the new MacBook, Dell notes its XPS offers higher resolution while Lenovo is calling the MacBook “#SoLastYear”.

The XPS 13 is also 2 millimeters thicker and weighs in at 2.8 pounds, compared to the MacBook’s 2.03 pounds, factors unaddressed by Dell.

Lenovo was the most boastful, calling the MacBook “#SoLastYear.” “WE SEE YOUR [sic] thin laptop (#SoLastYear) & raise you 3 modes, 2 USB ports & a higher-resolution touch display,” the company wrote. Lenovo’s Yoga 3 Pro, a convertible laptop-tablet running Windows 8.1 and starts at $1,499. Like the others, it’s also notably heavier than the MacBook.

Back in 2008, PC makers reacted in a similar way to the original MacBook Air, though nobody really knew what to make of it at the time. As the source puts it, “it took three years and Intel’s $300 million Ultrabook program for the rest of the industry to start catching up”. It now remains to be seen whether a similar trail will follow the new MacBook, that features a new “Force Touch” trackpad, a single USB-C port and a 12-inch Retina display in its super thin chassis.

Earlier today, iFixit gave us a closer look at the new “Force Touch” trackpad, which is now also found in the refreshed 13-inch Retina MacBook Pro and MacBook Air notebooks.