Asymco: Apple, IBM Global Partnership is the Biggest News of 2014 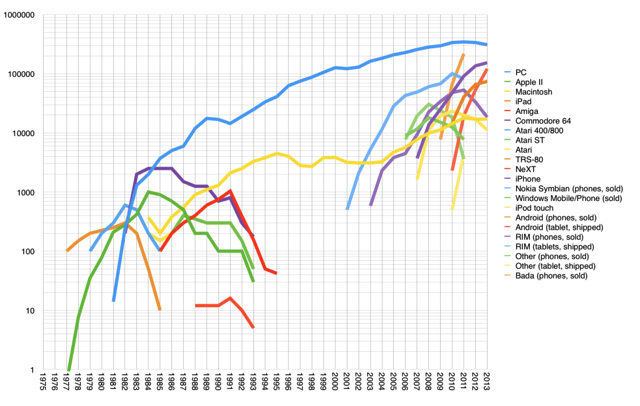 Asymco’s Horace Dediu believes Apple’s announcement of a global partnership with IBM, in an effort to change enterprise mobility and bring IBM’s big data and analytics capabilities to the iPhone and iPad, was the biggest technology news of 2014. He notes that “this new union is profoundly important”, as it indicates and evidences change on a vast scale.

“Both can achieve their goals better if they join forces: Apple offers assistance and expertise while obtaining access and lubrication for orifice entry. IBM offers modularized access to databases through its own APIs and obtains credible client experiences. The combination increases adoption of mobile (i.e. intuitive) solutions and an increase in productivity, benefiting the buyer.

The recent apps release showed just how transformative this relationship could be. We were witnesses to apps which appeared to be designed for users[!] They were not designed for committees that prepare checklists of requirements”.

Apple recently launched its iPhone 14 series of devices, introducing the new 'Plus' model to the fold. The 6.7-inch device joined the standard iPhone 14 as part of the entry-level offering. However, prior to its official reveal, the iPhone 14 Plus looks to have been called the 'iPhone 14 Max.' According to Dutch blog iCreate (via...
Steve Vegvari
34 mins ago