This summer is going to bring some exciting things our way. We have iPhone OS 3.0 firmware scheduled to be released and the possibility of a next generation iPhone. There’s also going to be another potential “iPhone killer” coming our way, called the Palm Pre.

The Palm Pre is either going to give Palm a new lease on life or potentially take the company further downhill if it fails to live up to expectations. It’s going to be launched on the Sprint network in the USA, which is CDMA.

AT&T, the sole provider of iPhones to our American friends down south recently had an “iPhone vs Palm Pre” internal memo “leaked”. Essentially this memo is for AT&T employees to memorize so they can persuade customers that the iPhone is worth buying. Take a look at this document: 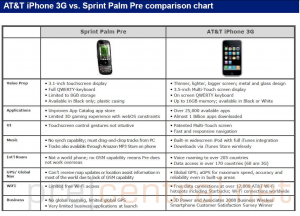 Clearly, looking at the points made out in the document it heavily favours the iPhone. Now, I’m pretty open to smartphone competition but until the Pre is released to the masses I’m going to hold my judgment on the phone.

Palm Has an Uphill Battle to Climb This Summer

The Pre will be entering a market dominated by Blackberries and iPhones. With the weak economic outlook and people pinching their pennies, it will be interesting to see how many people will purchase the Pre along with a data plan.

If the Pre is successful on its launch, don’t count Apple out just yet. This year will mark two years after the launch of the first gen iPhone, which means the 2 year AT&T contracts will be coming to an end. I think Apple will launch their third generation iPhone at the end of June, to coincide with the return of Steve Jobs.

Steve launched the first two iPhones, so it would only make sense he debuts the much anticipated third generation phone as well. Now, the perfect incentive to “sign on” for another two years with AT&T would be the launch of a new iPhone handset and iPhone OS 3.0.

I can only imagine how heated this summer will be with all these smartphone wars. One thing is for sure, we have heard lots about “iPhone killers” now (think back to the Samsung Instinct, HTC Touch Diamond, Blackberry Storm) but none of these touchscreen phones have come close to the iPhone.

Given that the Pre is going to be a CDMA unit at launch, it is possible that Telus/Bell could carry the phone in Canada. Would you give up your iPhone to get your grubby palms on the Pre?