So this is interesting.

ModMyi is reporting that an internal AT&T memo indicates that AT&T will only be taking pre-orders for black iPhone 4 models, with white iPhone 4 models coming “later this summer”. As many know, AT&T is the exclusive wireless carrier of the iPhone in the USA.

The internal AT&T memo, seen below, indicates that the iPhone 3GS 8GB in Black and the iPhone 4 16GB/32GB in Black will be available for sale. The white iPhone 4 in 16GB/32GB is labeled in a “Available later this summer” section.

At this time, it is unclear why this restriction may occur, but it may be likely due to a production/supply issue or that the white iPhone 4 is an Apple Store exclusive.

In any case, if the white iPhone 4 is being delayed for US and international carriers on launch day (June 24, 2010), then it is likely that Canada will feel the wrath as well.

If you were getting a white iPhone 4, will you change to the black iPhone 4? 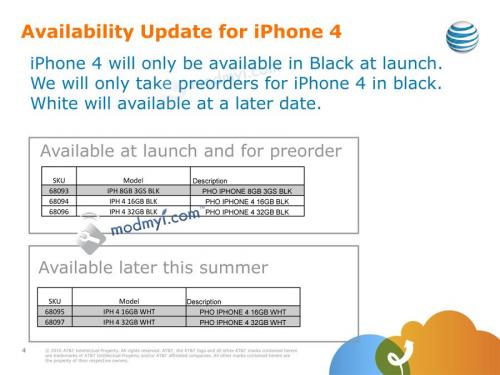