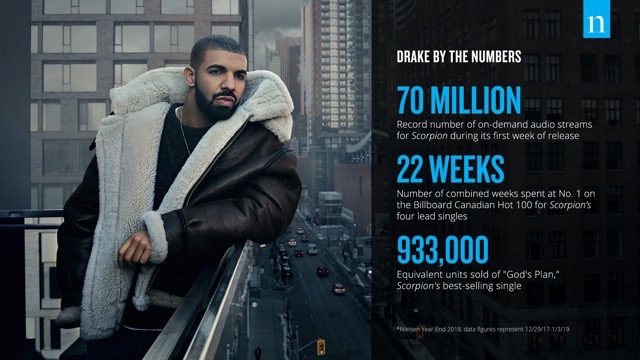 According to a new Nielsen report, Canada’s music industry experienced significant overall growth in 2018, with total album equivalent audio consumption up 21% over 2017. With 424,000 on-demand audio consumption units, including over 481 million audio streams, Drake’s ‘Scorpion’ was the album with the highest total consumption.

“The music industry in Canada is thriving following yet another year of tremendous growth and engagement,” said Paul Shaver, VP of Nielsen Entertainment Canada. “Canadians are listening and engaging with more music than ever before and we’re seeing an increased diversity of taste among listeners.”

The Canadian rapper’s ‘God’s Plan’ was also the No. 1 most-consumed song of 2018 with over 138 million audio and video combined streams. Ed Sheeran’s ‘Perfect’ was the leader in song sales, with just over 207,000 in digital downloads. The biggest selling album of the year is the ‘A Star Is Born’ soundtrack with album sales of over 92,000 units.

Other Canadian male artists who had a strong 2018 include Shawn Mendes, Loud Luxury, The Weeknd, and Tory Lanez. Similarly, Canadian female artists also had a strong year, including breakout hits from Bulow, Delaney Jane, Ria Mae, The Beaches, and Tenille Townes.