Amazon Deal: Aukey Bluetooth Selfie Stick on Sale for 67% Off at $9.99

It’s now time to change your selfie game, folks. If you don’t have one already, Aukey has a sale right now on their Bluetooth selfie stick for $9.99 on Amazon.ca, eligible for free shipping on orders over $25 and Prime. The MSRP on this is $29.99 but now right it’s available for 67% off. 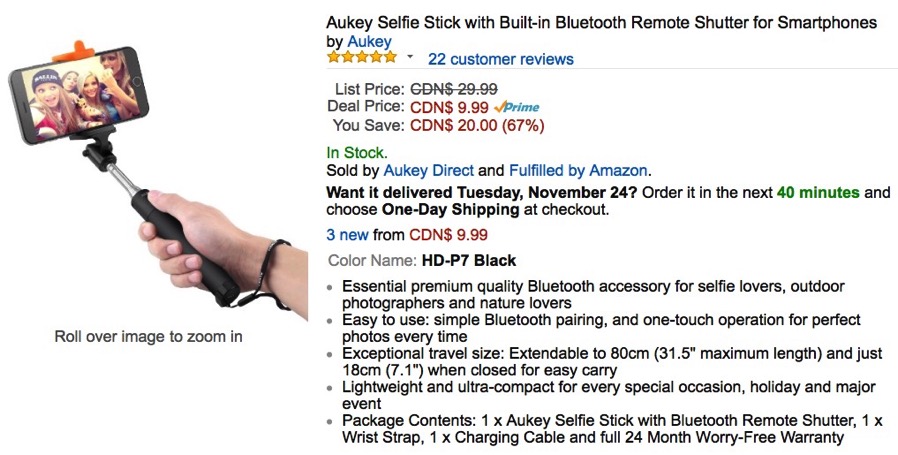 Bluetooth pairing with your iPhone means you don’t have to deal with plugging in a cable into your headphone jack like tradition selfie sticks, which can mess up audio recordings. However, this will need to be recharged but that shouldn’t be a problem.

This Aukey Bluetooth selfie stick currently has an average 4.9 out of 5 stars rating on Amazon.ca and people seem very happy with this product, calling it “well-made”, “compact” and “easy to use.”

If you need a stocking stuffer this Christmas, or something for the upcoming ‘secret Santa’ party, this is it. This gift could very well be life-changing for some of your friends and family.

Click here to jump on the Aukey Bluetooth selfie stick for $9.99 while it’s still available. It was posted on RedFlagDeals so stock may run out soon.