Apple’s Tim Cook said the Cupertino company had huge plans for Passbook, yet it’s seen as a boring, useless iOS 6 feature at the moment. In attempt to shed some light with the feature, one airline finally may be ready to utilize Passbook. No, it isn’t Air Canada, it’s actually an Australian airline.

An Australian traveler was in the airport with his iOS 6 beta device and he was going to use the airline’s mobile website to check-in to his flight. When the ticket appeared on his iPhone, he received an unusual message that asked if he wanted to add the ticket to Passbook. There isn’t a telling if he went through with the Passbook-method, but at least we know the airline is testing with Apple’s “.pkpass” extension. 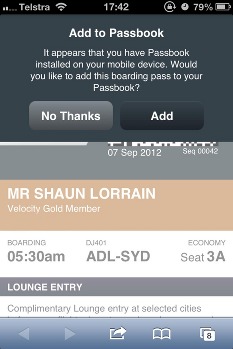 The only other airline committed to using Passbook at the moment is United Airlines. We just haven’t seen any similar type of prompt until this report.

Passbook will be released onto iPhones running Apple’s latest software, iOS 6. The release for the latest operating system will likely come after the iPhone 5 event this upcoming Wednesday. Initially the program promises to hold gift cards, boarding passes, movie tickets, and more. The pleasing experience imagined by Apple is walking up to the counter, having the clerk scan your iPhone, and bam, purchase completed.