B.C. Driver Gets Ticketed for Switching Song on Dash-Mounted Cellphone 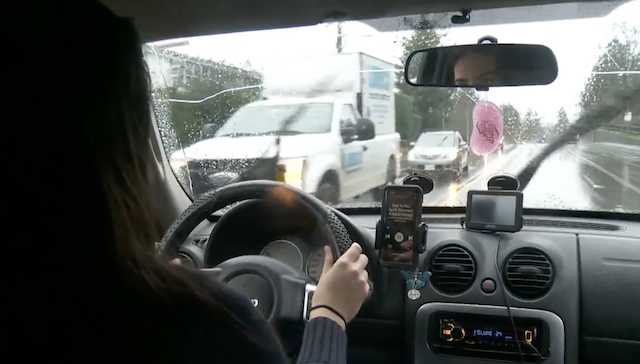 “He said there is a distracted driving grey area that even he is stuck in,” said Brittney Taylor, who was pulled over by an officer near Shelbourne Street and McKenzie Avenue on New Year’s Eve after she touched her phone that was secured in a phone mount.

“He doesn’t know if everything is legal or if what I did was legal or illegal”, Brittney continued. “I have a daughter, I go to school, I’m a student. I don’t make a lot of money, so it really impacted me financially and emotionally.”

Meanwhile, Saanich Police has issued a statement saying drivers are only allowed to touch their mounted phone once to answer or end a phone call.

“The legislation does not permit touching the device to play music, and should only be done prior to driving,” the statement said.

“Furthermore, the music must be streamed through the vehicle speakers as well. When driving, motorists should be focused solely on the task of driving. It’s that simple.”

According to lawyer Kyla Lee, however, the laws are not as straightforward as the police make them out to be. “The distracted driving rules in British Columbia are not clear and this leads to continuous problems.”

Amazon announced an all-new Alexa experience built just for kids today, with the launch of Echo Dot Kids. Echo Dot Kids come with Owl or Dragon designs and a 2-year worry-free guarantee. If your speaker breaks, Amazon will replace it. Also included are parental controls (time limits; explicit lyric filtering) and one year of Amazon […]
Gary Ng
23 mins ago

[caption id="attachment_382288" align="aligncenter" width="1920"] Image: @OnLeaks and @Smartprix[/caption] Samsung's upcoming flagship smartphone, the Galaxy S23 Ultra, has just leaked in high-resolution renders that reveal its design and more. The leaked renders come from Smartprix and known tipster @OnLeaks. Samsung is months away from actually unveiling the Galaxy S23 series, which is being developed under the...
Nehal Malik
36 mins ago