BC Driver Gets 2 Distracted Driving Tickets in 7 Minutes, Hit with $736 Fine

The New Westminster Police Department in the BC Lower Mainland has been clamping down on distracted drivers this week, and recently shared an image of one driver getting two tickets within seven minutes.

According to the NWPD Twitter account, one distracted driver was “ticketed twice in 7 minutes. That’s $736 and 8 points.” 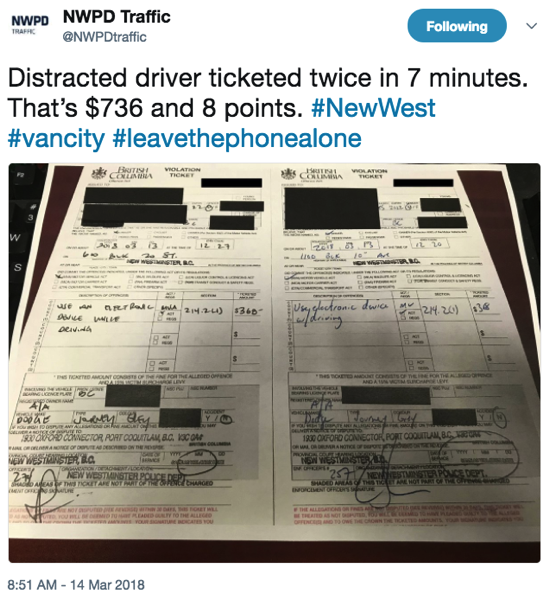 According to the BC Motor Vehicle Act, a first infraction for distracted driving also comes with a $175 ICBC Driver Penalty Point premium, so that’s $543 for a first-time ticket.

If drivers get two or more distracted driving convictions in a three-year period, they are charged a Driver Risk Premium (DRP), billed annually and separate from insurance premiums. According to the BC MVA:

For example, drivers with two or more convictions for the use of electronics devices while driving over a three-year period could pay as much as $2,000 in penalties – an increase of $740 – in addition to their regular vehicle insurance premium.

Last week, the NWPD handed out 116 distracted driving tickets at the same location in four days, near the Queensborough bridge. It seems drivers just aren’t getting the message to keep their hands off their smartphones while driving.

Wedbush Securities analyst and regular Apple bull Daniel Ives said in a recent note to clients that the iPhone maker's upcoming earnings report for its fiscal first quarter of 2023, scheduled for Thursday, February 2, will be the "most important earnings" for the tech market (via Apple 3.0). "After a horror show year in 2022...
Nehal Malik
22 mins ago