University of Victoria professor and ecologist Brian Starzomski has developed an innovative new app titled “Central Coast Biodiversity”, that gives people around the world the ability to experience the diverse beauty of British Columbia’s coast (via The Toronto Star). Starzomski, who requires his students at the university to get out into the wilderness and identify different species, has catalogued over 700 species in the Great Bear Rainforest and logged them in a new digital field guide. 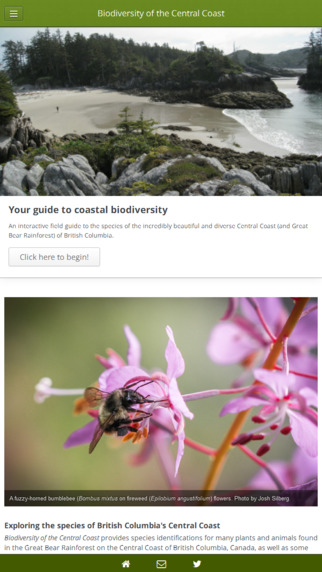 Starzomski and his team got the idea for the app from a class the professor taught at the remote Hakai Institute on Calvert Island, off the West Coast. Along with his former student Kelly Fretwell, the conservation biologist drew on a large network of academics, students and people living in and around the Great Bear Rainforest to collect photos and information on various species. He says students used to be sent into the wilderness equipped with a shotgun and instructed to bring back specimens for research.

“We definitely don’t want to set up every student with a shotgun, so we thought ‘let’s try and do a kind of digital species collection’ and ‘let’s try and do this so people can put this on their phones and identify the species themselves,’ ” Starzomski said.

“Most British Columbians, most Canadians, most people will never visit this place, but it’s filled with wildlife, it’s filled with beautiful things,” Starzomski said. “We’d like to show that off to show people just how special this area is.”

The free app currently includes an inventory of 210 plants, 80 birds, 120 seaweeds, 190 marine invertebrates, and 20 mammals and reptiles. Each listing has a photo and some information on what the species looks like, where it can be found and what other species may appear to be similar.

You can grab the free app for iOS using the following App Store link:

Calgary resident Matthew Legault and his father, François Legault, claim Amazon Canada refused to refund them after delivering a knockoff Nvidia graphics card worth $690 earlier this year (via the CBC). Matthew's parents ordered him parts for a personal gaming computer from Amazon.ca. While all of the other parts were fine, Matthew discovered after unboxing...
Nehal Malik
43 mins ago