Belkin, one of the leading manufacturers of audio products and smartphone accessories, has today announced the launch of its new 3.5mm Audio Cable with Lightning Connector, that allows users to connect directly to their car stereo or home speakers using a single cable. 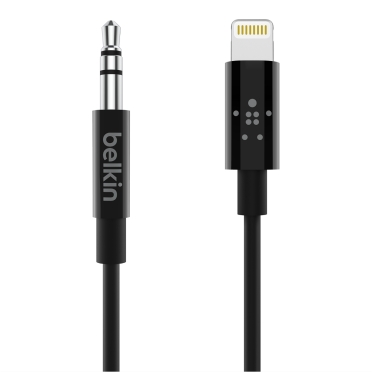 Belkin’s new cable outputs high resolution audio by converting digital signals to analog. It is available in multiple lengths, giving consumers the freedom to listen to music and other content at home or in the car. The cable is fully compatible with iPhone X, iPhone 8, iPhone 8 Plus, iPhone 7 and iPhone 7 Plus.

“Enjoy your favorite music anywhere with a single cable that connects your iPhone to 3.5 mm car speakers or home speaker systems. Available in multiple lengths for convenience, the first MFi-certified 3.5mm audio to Lightning cable on the market guarantees sustained compatibility with iOS updates, preserving functionality for a seamless experience.”

The 3 ft version of Belkin’s 3.5mm Audio Cable with Lightning Connector is available for US $29.99, whereas the 6 ft version can be ordered for $29.99 on Belkin.com.

The cables will also be available through Apple, Best Buy, Target, and other retailers worldwide in the coming weeks.