Bell’s publicity stunt for its new streaming TV service CraveTV appears to have paid off as earlier this morning four of six “Cravers” managed to set a new Guinness World Record for the longest marathon watching TV.

After starting Monday, Dec. 8 at 1 p.m. ET, the Cravers officially beat the world record at 7:01 a.m. ET this morning, but continued until 8 a.m. ET with another episode of SEINFELD.

Blake Cronyn, Jasmin Shim, Cam Healy, and Lisa Matlock managed to make it all the way while Vancouver’s Devon Ferguson bowed out at the 44 hour mark and Monique Redhead stopped at 1:02 a.m. ET this morning at 84 hours. 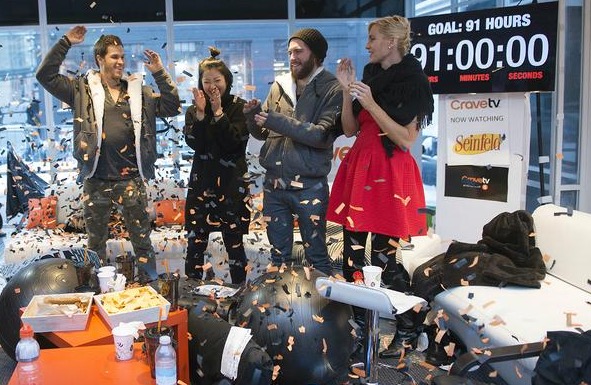 So legit. Michael from @GWR presents the Cravers with the official #GuinnessWorldRecord plaque! #AllYouCanWatch pic.twitter.com/aDRlJLv9HT

The streaming TV service—which launched yesterday—consists of popular reruns, costs $4 per month, and requires an existing TV subscription, available to customers on Bell, Telus and Eastlink.