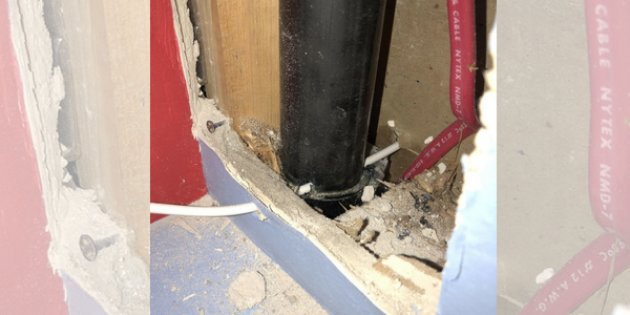 A New Brunswick woman, who had just moved into a new house and had a fibre optic cable for internet access installed, has claimed that a Bell technician installed a cable through her water pipes, The Huffington Post is reporting. She shared her experience on Reddit where it went viral, while also posting some photos on Twitter.

Well @Bell I am very angry and sad that you drilled the fibreop cable THROUGH my drain pipe on a LONG weekend when plumbers are going to be EXPENSIVE and not to mention, that means NO INTERNET. pic.twitter.com/1lZTcjyZl6

Nikki said she was so excited to have internet access in the new place. However, when she went downstairs just after washing dishes and found water all over her ledge, she knew something was wrong.

She called a plumber, who tracked the source of the leak to one segment of the wall. When the wall was cut open, they found that the fibre optic cable had been installed directly through a drainage pipe.

Because Monday is a statutory holiday in New Brunswick, she explained Bell’s customer service informed her that she wouldn’t hear back from the company until Tuesday. As for Nikki, she was able to get a plumber on short notice who could fix the pipe and posted a photo of her new, leak-free drainage pipe to Reddit.

Nikki later posted that someone from a local Bell affiliate had gotten in touch with her to send over another technician. She wrote that someone will be sent to replace the drywall after the long weekend which was damaged on both sides due to exposure to moisture.