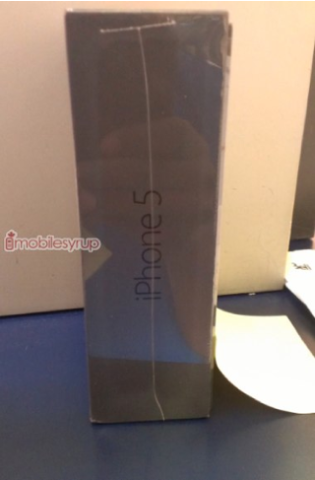 A report from MobileSyrup just moments ago verifies that iPhone 5 stock is arriving at Bell locations three days ahead of the official release. Those who had the chance to pre-order their handsets in-store probably love to hear this because it’s some extra re-assurance that delays shouldn’t be a problem.

The anonymous tipster tagged a photo to the report without citing a specific location for security purposes. It appears that the box is the same as the one on the iPhone 5 pre-order page.

If you still have pre-ordered the iPhone yet, chances are you will have to wait until Friday to pick one up at the Apple store. We have posted a full launch roundup post with all information on the iPhone’s release. As of now, all Canadian carriers are ‘sold-out’ of the iPhone 5 pre-orders.

The iPhone 5 comes equipped with the new A6 processor, which doubles the speed of the iPhone 4S. Other features include a larger display, lightning dock connector, and LTE internet. Click here to learn the full details.

Where did you pre-order your iPhone from?