Bell, Virgin and Telus iPhone 5 Pre-Orders Have ‘Sold Out’

Earlier this morning, the Telus iPhone 5 pre-order page was updated to note they were sold out. The revised page noted a revised September 28th shipping date, as opposed to the original September 21st ship date. 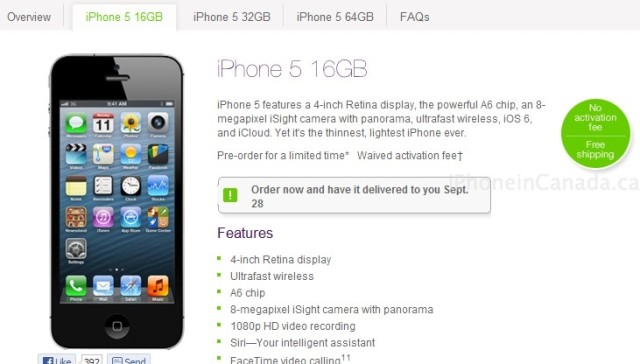 Now, it appears Bell and Virgin have also of iPhone 5 pre-orders as well. Virgin’s twitter feed said they were ending in-store and online pre-orders as of today, and according to MobileSyrup, Bell also is sold out too:

“Due to the overwhelming success of the Apple iPhone 5 pre-order program , Bell is no longer accepting pre-orders past end of day September 15, 2012.”

After only debuting with 16GB models, Fido yesterday later added 32GB and 64GB options after consumers voiced their concerns online. Some readers have noted their Rogers pre-orders have now moved into the “In Progress” phase.

Do note that Future Shop and Best Buy are still taking pre-orders, so give them a try if you can’t get access to stock from Bell, Virgin or Telus.