Benchmarks Reveal Galaxy S 4 Has The Fastest Smartphone Processor Yet

The folks over at Android Authority have given Samsung’s Galaxy S 4 the Geekbench treatment, revealing that the device sports the fastest smartphone processor yet. With its Qualcomm Snapdragon 600 quad core processing chip, Samsung Galaxy S4 tops the benchmarks with a score of 3163 on Geekbench. In comparison, the iPhone 5’s dual core A6 processor gets a score of 1596. 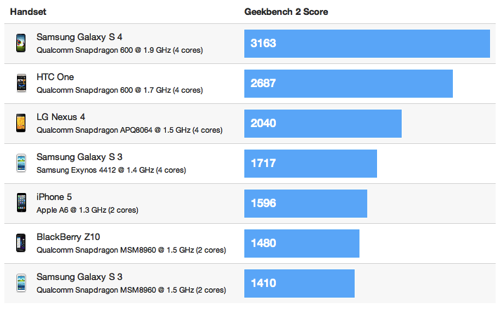 The above graph shows Geekbench 2 scores for the Samsung Galaxy S 4 along with several Android phones, the iPhone 5 and the BlackBerry Z10. Second and third spot HTC One and LG Nexus 4 both get scores of over 2000, while the S 4 is the only smartphone to top the 3000 mark. However it remains to be seen how the Galaxy S 4 will handle the increased power and cooling requirements that generally come with faster processors.

The Samsung Galaxy S 4 is also twice as fast as the Apple iPhone 5. Apple has improved performance dramatically in the past (there was 2.5x increase in performance from the iPhone 4S to the iPhone 5). Will they be able to make a similar improvement for the next iPhone?

The Samsung Galaxy S 4 is also twice as fast as the BlackBerry Z10. However, unlike the Galaxy S 3 and the iPhone 5, the Z10 launched this year, not last year. Will BlackBerry feel compelled to release an updated handset with a faster processor sooner rather than later?

Since the team has only tested Samsung Galaxy S 4 with a Qualcomm Snapdragon 600 processor, it’s not yet clear how the new Exynos 5 Octa SoC will perform, though the Geekbench scores are expected to be similar.

Apple today released iOS 16 beta 5 and more for developers today. These new releases included some new features, such as bringing back the battery percentage to the battery icon in the status bar on iPhone. Also, for finding devices such as your iPhone from Apple Watch, there’s a new alert sound. Some other minor...
Gary Ng
44 mins ago