What was of no interest to activist investor Carl Icahn was for Warren Buffet’s Berkshire Hathaway, well known for his avoidance of technology stocks, who acquired a nearly $1 billion stake in Apple, a filing revealed earlier in May. What was not known was how much Berkshire was willing to pay for that stock. Bloomberg now has an update on that.

According to a filing spotted by the news outlet, Berkshire purchased 9.81 million shares of Apple in the days through March 14, totalling about $976 million. The information was revealed in a document submitted by Berkshire’s Geico unit to insurance regulators. That’s $99.49 per share.

Berkshire has a reputation of avoiding technology stocks, so this investment made headlines and some even connected it to Apple’s stock price rebound, which — in fact — has fallen 13.4% between April and May 12 after the company reported a slowdown in iPhone sales.

Berkshire’s belief in Apple’s growth is yet to materialize, as the stock price is currently down 1.80% to $95.76. 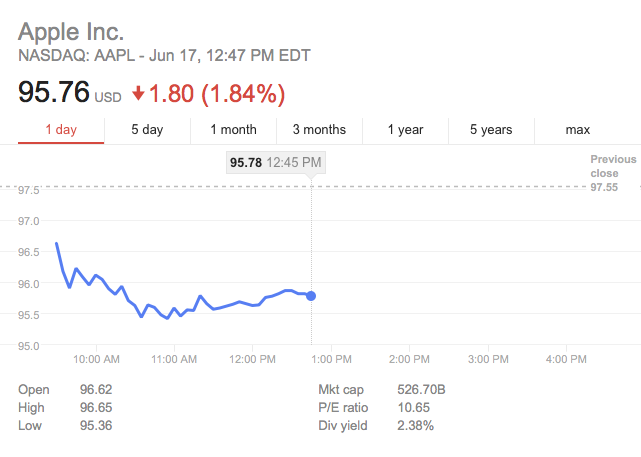