Best Buy currently is holding an Apple event where they are offering bonus Reward Zone points on select Apple products. As for iPhones on sale, the 8GB iPhone 4 is currently available for free on a three year contract either from Rogers, Telus, Bell or Fido. This phone is regularly priced at $49 on a three year term.

Other sales include $50 iTunes gift cards, available for $39.99 (applicable towards purchases in the App Store, Mac App Store and iTunes). Also, if you’re close to a Loblaws in Ontario they are also offering 20% off $50 and $100 iTunes gift cards  as well (thanks @tosui). 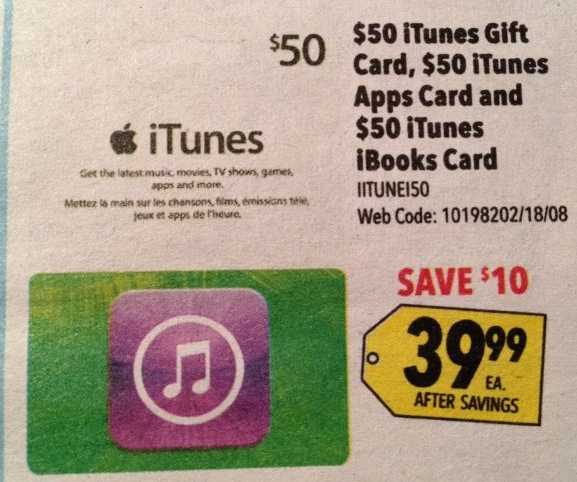 If you’re looking to purchase a new iPad, Best Buy has knocked $20 off the retail price. Do note Apple does have their Back to School Promo still going on until September 11th, which will enable you to receive a $50 iTunes gift card if you purchase an iPad from them or an authorized Campus Store.

Let us know if you’re going to jump on any of these deals.