Update 1: Best Buy confirmed with us the pre-order lasts up until October 14th, the day of the iPhone 4S launch. 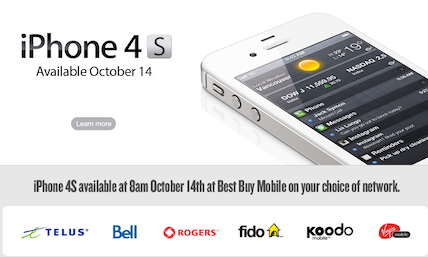 Hot on the heels of Future Shop’s Thanksgiving weekend iPhone 4S pre-order announcement, Best Buy has now followed suit. Pre-orders started today for the iPhone 4S on Telus, Bell, Rogers, Fido, Koodo, and Virgin. You will require a $50 deposit to secure your device, as per the info provided to us via email.

Customers will be able to pick up their pre-ordered phone on October 14th at 8AM from their designated Best Buy location. The phone will also be available to other customers on that day as well.

Let us know if you’re pre-ordering from Best Buy. If stores don’t know about this yet, they’ve missed the memo.