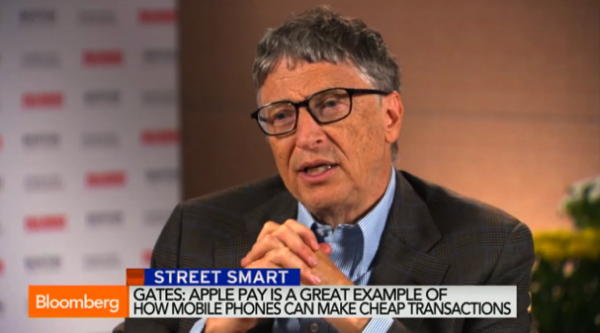 Microsoft’s co-founder sat down with Bloomberg to discuss his work with the Bill & Melinda Gates foundation and his work in bringing affordable banking to the poorest.

Bill Gates was speaking about wallet PCs and digital money 20 years ago, but Microsoft hasn’t entered the payment market yet. Although Microsoft had a great vision for this, it was missing the devices needed to step in. Now that Google is already in the mobile payments industry, and Apple will kick-start its Apple Pay system, isn’t this an area that Microsoft should be stepping into as well?

Apple Pay is a great example of how a cell phone that identifies its user in a pretty strong way lets you make a transaction that should be very, very inexpensive. So the fact that in any application I can buy something, that’s fantastic: The fact that I don’t need a physical card anymore, I just do that transaction, and you’re going to be quite sure about who it is on the other end.

When asked if Microsoft wants to step into the mobile payments industry, Bill Gates avoided giving a direct answer and instead mentioned several areas Microsoft should focus on. He suggested, for instance, that improving Office would be high on that priority list. There’s a long list of opportunities Microsoft has to innovate, so Gates has been there to advise the company’s CEO Satya Nadella to make sure the company keeps pace.

Gates said he is very happy with what Satya Nadella is doing: He sees a new sense of energy, a lot of opportunity, and the effort required to explore those opportunities.

Meta CEO Mark Zuckerberg warned employees of a hiring freeze and impending corporate restructuring during a weekly Q&A session on Thursday — reports Bloomberg. Facebook and Instagram's parent company will cut costs and, for the first time, jobs amidst economic challenges and a notable downturn in revenue. Meta this year reported its first-ever yearly decline...
Nehal Malik
41 mins ago