Owner and operator of Billy Bishop Toronto City Airport PortsToronto has today announced the launch of a brand new mobile app Billy™, which is aimed at making the traveller journey to and through the airport easier. The app consolidates useful information and services for travellers and offers features such as flight-tracking tools that provides real-time flight updates, weather and traffic conditions for both departure and arrival cities, airport information and much more.

“Billy™ will provide the opportunity to bring a new level of innovation to the airport that will have a direct and positive influence on the traveller experience,” said Geoffrey Wilson, CEO, PortsToronto. “Billy Bishop Toronto City Airport has been embraced by travellers because it offers a convenient, efficient and friendly approach to travel. The opening of the tunnel in July has changed the way that travellers are accessing the airport and now the app will add value and drive engagement by offering relevant information, tools and services that make it even easier for travellers to get to their destination.”

The app also packs an in-app travel magazine that includes curated content and City Insider guides, which feature recommendations, travel suggestions and insightful articles. The content in the magazine can be downloaded for reading while inflight when Internet connections are no longer available. Furthermore, the app is equipped with alerts and in-app messaging that keeps travellers up to date with events that may affect their journey. 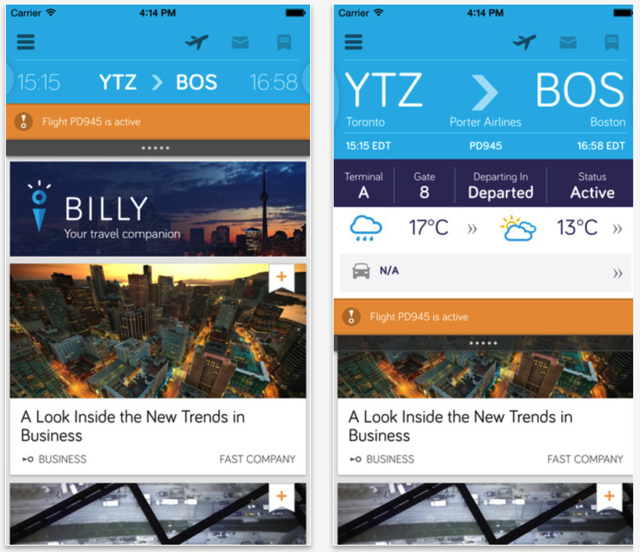 The Billy app is now available as a free download on iOS, Android and BlackBerry platforms.