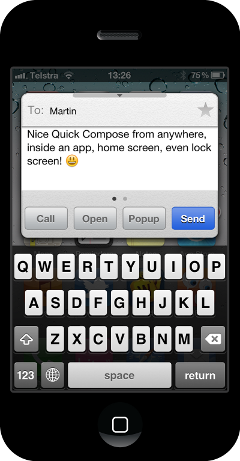 Over the past 6 months the team at biteSMS has been working on the latest version of their app, version 8.0. The 8.0 release of the app intents to make it iOS 7 compatible, with all of the standard iOS 7 features plus all the existing features of biteSMS.

The beta is available from the following Cydia repo: http://test-cydia.bitesms.com. Tom (@Tommyguzman) provides online support for the beta via Skype at bitesms.support.

Today, the team released beta 7 of version 8.0 which brings iPhone 5S compatibility, bug fixes, and some UI improvements. Here is a list of beta releases in reverse chronological order:

– Fixed license issues for older users. BUT ANYONE WHO PURCHASED SINCE 28 December MUST DO biteSMS > Settings > Restore as their license will be invalidated. Apologies but we were using a non static deviceID.

– New graphics thanks to @Tommyguzman

According to the team the app beta is about 70 percent complete. If you have tried out the biteSMS beta let us know in the comments below what you think.

Apple’s Stage Manager multitasking feature in iPadOS 16 is only for tablets with the company’s M1 chip, but that is now changing. According to Engadget, Apple told the publication Stage Manager is now expanding to older iPad Pro 3rd gen and 4th gen models when iPadOS 16 is released later this year. M1 iPad Pro […]
Gary Ng
35 mins ago