The iPhone remains a popular target by thieves (even those armed with chopsticks) but there are times when victims fight back, sometimes resorting to clever ways. The NYPD even has a dedicated team that works with Apple to retrieve stolen devices. Our own wireless carriers have vowed to fight ‘iCrime’ as well.

Sometimes, self defence is all it takes to prevent yourself from being a victim. That’s what 16 year old Jordan Sunnus did when he was attacked by a would-be thief that wanted his iPhone one night while he was jogging. 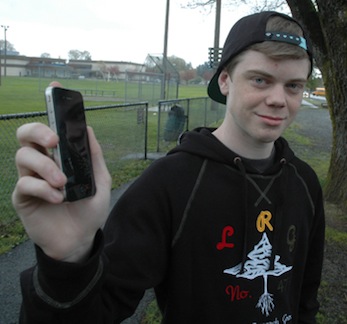 According to the Nanaimo Daily News, the Cedar Secondary student was approached by a voice from behind complimenting him on his cellphone while he had stopped to select a new playlist on his iPhone. He was then pushed to the ground and struck in the face.

The difference in this story? Sunnus has a black belt in karate, is trained in Brazilian jiu-jitsu and mixed martial arts. His response was instinctual thanks to his training:

“I hit him four times and then I threw him to the ground with a hip toss, and I hit him again in the face.”

He left his attacker, then went to the Nanaimo RCMP detachment to report the incident.

“He was just kind of lying on the ground,”

Sunnus hit his attacker five times but says he used the right amount of force to protect himself:

“There is the possibility he had a knife and if I let off a little, he could have used it on me,” Jordan said. “If you hit him once, what if he had a gun?”

According to his sensei Kurt Nordli, Jordan is not the typical person looking for a fight and is “very mild-mannered.” He says he was both proud and worried when he heard about the incident, but says the result is due to the Jordan’s hard work paying off.

The attacker was never found by Nanaimo RCMP but is described as “white, six foot two and wore a black hoodie, which obscured his face. He had on white shoes and blue jeans.” Also reportedly lost is the attacker’s dignity after getting embarrassed by this skilled teen martial artist.