BlackBerry Offers up to $600 Trade-In Value on iPhones

BlackBerry has launched a new campaign targeting iPhone owners: You receive up to $550 if you trade in your iPhone and “upgrade” to the BlackBerry Passport. 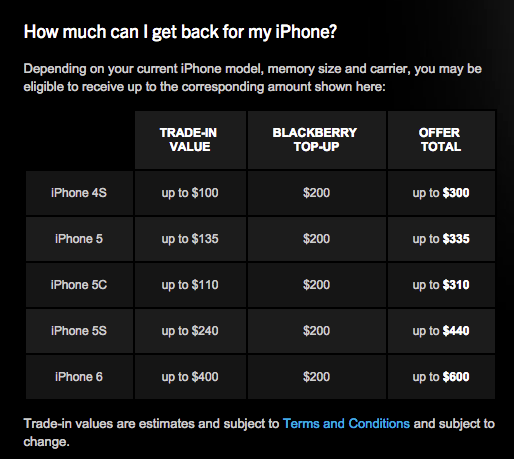 As with every trade-in program, there are certain criteria that need to be met to qualify. First of all, there is a list of eligible iPhones that are eligible for the program, and secondly, the program is limited to the US and Canada.

Canadian iPhone users with an iPhone 4S can receive up to $300 for their device. Depending on the model, the trade in value is up to $100, plus a $200 top-up from BlackBerry. US users are eligible for up to $90, plus a $150 top-up from the Canadian manufacturer.

The catch? You will need to purchase a BlackBerry Passport from the manufacturer’s online store or Amazon, between December 1, 2014, and February 13, 2015, and present proof of purchase. Then you will receive the total value of your trade-in and top-up on your bank card within 6 weeks.

Oh, by the way: the BlackBerry Passport costs $799 and you can pre-order it in BlackBerry’s online store.