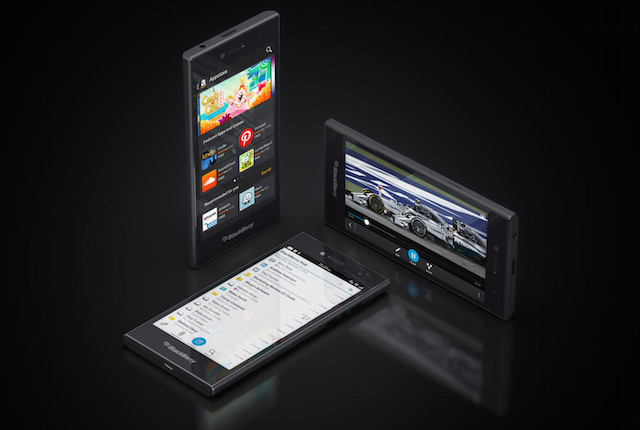 Introduced today at Mobile World Congress in Barcelona, BlackBerry’s new ‘Leap’ smartphone has ditched the famous QWERTY keyboard in favour of a 5-inch touchscreen. The device runs the BlackBerry 10 OS, features an 8-megapixel camera with edge-to-edge HD display and a textured back case, and will sell for $275 when it launches this month in Indonesia and Brazil. According to BusinessInsider, the BlackBerry Leap will be released in North America and European markets in April.

“At last year’s Mobile World Congress, BlackBerry launched the Z3, which had a full touchscreen. But the launch of the Leap gives BlackBerry a more rounded current portfolio — although it’s unclear how a BlackBerry phone without the signature keyboard — or any other standout features — will be able to compete with Android devices in the same price range.”

BlackBerry notes that the Leap’s battery life can last up to 25 hours of “heavy use”, on of its main selling points. The other feature of the device highlighted by BlackBerry is its security. The Leap is said to have encryption support, as well as built-in anti-malware protection and a back-up wipe and restore function.

For a better idea, check out the first hands-on video of BlackBerry Leap below: