When the iPhone was released almost a year and a half ago, it was a revolutionary phone because it was based on an all out touchscreen that could render the internet just like your computer’s browser. Throw in an all out iPod plus multimedia capabilities and Steve Jobs and his team created a winner. Apple set the bar really, really high and other companies had to play catch up.

Some of these so called “iPhone killers” dubbed by the media have turned out more to be iPhone duds. Specifically I’m talking about the Samsung Instinct and HTC Touch Diamond. Sorry guys, but you’ll have to try a bit harder to even surpass the design and intuitive touchscreen of the iPhone. However there is one new offer from Research in Motion that might challenge the iPhone 3G: enter the Blackberry Storm. 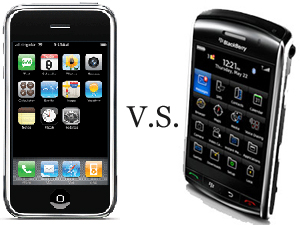 The Blackberry Storm is the newest offering from RIM that is button free and is based on a full touchscreen. It has a 3.2MP camera, GPS, 3G, Maps, built in video/audio player, and more. It is going to be available this holiday season from your friends at Telus (Verizon in the US is pricing it at $250US on a two year contract). How exactly will this new Blackberry fare against the iPhone 3G (from Rogers/Fido)? Only time will tell folks. One thing is for sure Apple seems to be selling more and more iPhones compared to Blackberries.

When Apple announced it sold over 10 million iPhones and surpassed sales of RIM’s Blackberry, many people were surprised at the numbers. It’s not that hard to believe though when you think about it. Design a phone that looks sexy all around and actually works, and that’s you get from the iPhone (although there are features lacking that we all crave). RIM has released the Bold, Pearl Flip, Storm, and upcoming Curve 8900 since May. Maybe they should be sticking to quality versus quantity?

People have been lining up to get their hands on the Storm and it was recently reviewed by Walt Mossberg, co-editor of AllthingsDigital. Here’s what he had to say about the Storm versus iPhone:

The Storm has some important advantages over the iPhone. Its screen, while 7 percent smaller physically, offers about 13 percent higher resolution. Photos and videos look beautiful on it. It has much better battery life for phone calls than either the iPhone or the Google G1. While the latter two phones deliver just under their claimed five hours of talk time, in my tests, the Storm lasted a bit over six hours, which is actually half an hour more than its claimed 5.5 hours of talk time. And the Storm has a removable battery, unlike its Apple rival.

Okay, let me also add in copy and paste, MMS, 3.2MP camera, and video recording. These are all the features iPhone users want desperately, but the Storm has them all out of the box.

Regardless, what it boils down to is buying the device that suits YOUR needs. But of course everybody love a cheap fanboy versus fanboy flame war. Just check out this following picture posted on BBGeeks.com (I giggled uncontrollably like a little school girl): 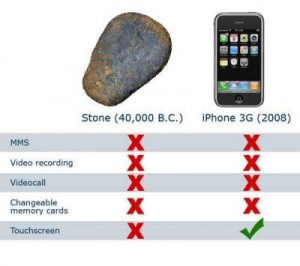 One thing is for sure, until companies can come up with a browser better than Mobile Safari, I’m going to be sticking to my iPhone 3G. 🙂 So what do you guys think? Does RIM have a potential iPhone killer on its hands?