Just ahead of BlizzCon 2018, an annual gaming convention held by Blizzard Entertainment to promote its major franchises, including Warcraft, Diablo, and Overwatch, the company has released a new Apple TV video streaming app that will allow users to stream exclusive content from the event on their big screen TVs (via MacRumors). 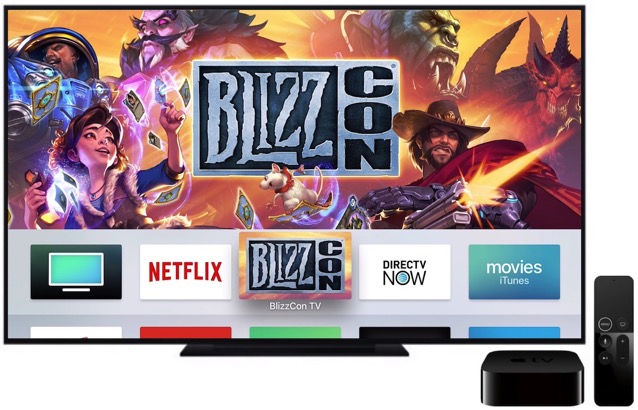 In the past, Blizzard has provided several ways for users who can’t attend the event in person in Anaheim, California, to watch panels and videos live on mobile and BlizzCon.com but this time, the company has decided to roll out an app dedicated to the event.

Users who download the free app from the App Store on their 4th or 5th gen Apple TVs also need to purchase a $49.99 ‘Virtual Ticket’ from Blizzard to unlock all of the content, including original BlizzCon video content, a Community Night, the BlizzCon 2017 video archive, and live panel coverage.

“The BlizzCon TV home screen on Apple TV shows upcoming events, live and on-demand videos, content broken down by various Blizzard games, and more. There’s a dedicated e-sports tab, which has already kicked off with content for Heroes of the Storm and StarCraft II, and will see World of Warcraft and Overwatch tournaments begin next week.”

Blizzard has also announced AirPlay and Chromecast streaming support from the BlizzCon mobile app to compatible devices, as well as a BlizzCon TV app for Amazon Fire TV users.