BMO has just announced the launch of its new Pre-Authorized Payments Manager on its mobile banking app. The new feature provides an enhanced view of pre-authorized payments, including subscriptions attached to a BMO credit card. 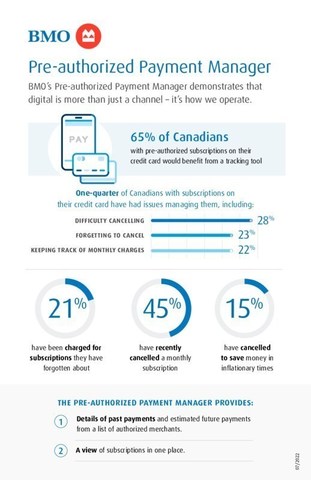 A recent BMO survey found that 65% of Canadians with pre-authorized subscriptions on their credit card would benefit from a tracking tool to help manage their money, whereas 33% have paid for a subscription they do not use.

BMO is now the only bank that displays both past and future payments per credit card, helping customers keep track of their monthly credit card subscriptions by providing:

The launch of this feature will help address some of the insights revealed in BMO’s survey including:

Dropbox support has just confirmed that a public beta with full support for macOS will be released in Q4 this year, making the desktop app fully compatible with macOS 12.3 (Monterey). Dropbox users on macOS 12.3 see a compatibility warning about the Dropbox system extension, which results in users being unable to open online-only files stored...
Usman Qureshi
6 hours ago

WhatsApp has simplified the process of setting up Disappearing Messages by allowing users to set default Disappearing Messages for new and existing chats all at once. Users can now choose their duration timer and then select and apply it to whichever chats they want. For those who aren’t familiar, WhatsApp lets you send messages that disappear...
Usman Qureshi
6 hours ago