Luxury car maker BMW has announced its new “BMW Genius Everywhere” program across all of its dealerships, a customer assistance setup inspired by Apple’s industry leading Genius Bar program incorporated in its retail stores, reports TNW (via Adage). The German car maker has asked its dealers to hire young, tech-savvy employees to handle questions about its vehicles on the showroom floor. 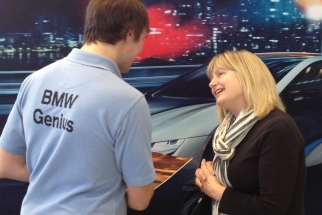 The program debuted in UK last year and will be available in the US by early 2014. The report notes that BMW has been training employees to assist customers with questions about cars and their features, and has provided them iPads to do so. The company wants a “critical mass” of Geniuses in time for the rollout of the i3 electric car that will reach U.S. dealerships in early 2014, said Peter Miles, BMW of North America’s VP-operations.

BMW will launch the program in Europe first, coming to the US by the time its new i3 electric car reaches dealerships early next year. The company will hire associates based on their knowledge, not rewarding them with commission on sales. Like Apple’s Geniuses, staff will be on hand to assist with technical questions, rather than push customers in an attempt to sell cars.

Apple products will be used to impart information, but the car-maker will also offer iPhone and iPad apps that include vehicle overviews and feature explanations, as well as a BMW Assist call button inside every one of its cars (offering help from a real person).

Lexus and Cadillac will also be rolling out their own Genius Bar programs in the US soon. The source points out that Lexus has already trained 2,400 representatives in nine cities over the past four months.

Apple is urging suppliers to make sure that all shipments from Taiwan to China follow Chinese customs regulations to avoid processing delays at the border — reports Nikkei Asia. As political tensions between China and Taiwan continue to rise, the former has started strictly enforcing a long-standing rule that requires Taiwan-made imports to be labelled...
Nehal Malik
13 hours ago

Amazon announced on Friday it has entered into a merger agreement to acquire robot vacuum maker, iRobot, in a $1.7 billion all-cash deal. “We know that saving time matters, and chores take precious time that can be better spent doing something that customers love,” said Dave Limp, SVP of Amazon Devices, in a statement. “Over...
Gary Ng
14 hours ago