The Wall Street Journal is reporting that in an effort to bring its dealerships into the digital age, luxury car maker BMW is replacing salesmen with “product geniuses” at its dealerships to explain the complex technology in its cars to the customers. The shift was recently on display at the National Automobile Dealers Association annual meeting, where dealers gathered around convention booths watching product geniuses peddle the latest software. 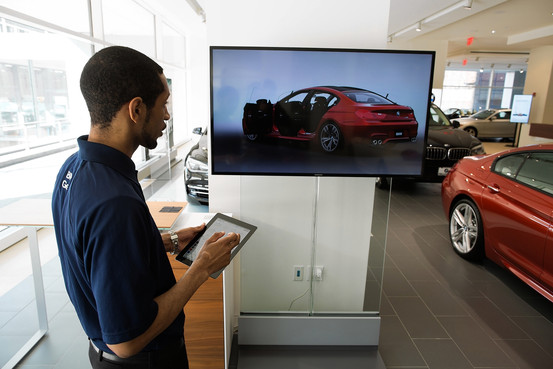 BMW’s new program is aimed at having fewer sales people and fewer cars on showroom floors, and more information delivered through video displays and by employees, said sales and marketing chief Ian Robertson. “When people go on the Web, they can watch videos and read reviews,” said Karl Schmidt. “The showroom will reflect that a lot more. There will be fewer balloons, fewer banners and more digital, more hands-on.”

Dick Heimann, vice chairman of Lithia Motors Inc., which owns several BMW stores, said the design changes and addition of “product geniuses” could make the job more appealing to young people who are more familiar with the Apple retailing model.

“There is not that pressure on you to sell the car,” Mr. Heimann said, adding that his company plans to scout local colleges to fill the new “product genius” positions.

“Think of them as our version of the Apple Genius Bar,” said Alicia Boler-Davis.

Other car makers also are heading in the same direction, with General Motors working with retailers to install “connection centers” in its showrooms, where staff will use iPads and other tablets to offer tech support to customers.