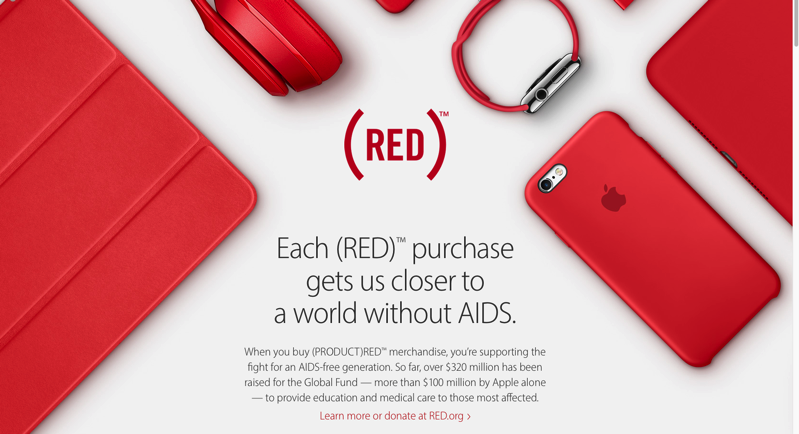 Ten years ago, U2 frontman Bono and Bobby Shriver, a US lawyer and nephew of John F Kennedy, kick started something that had an incredible impact on (at least) two continents: North America and Africa. They dreamed big: to engage companies and their customers and employees in the fight against Aids. That’s how the RED products you may be familiar with were born. RED’s early partners included Starbucks, Apple and Nike.

“Corporate social responsibility is a phrase that is in common usage now but it wasn’t back then,” Bono says.

To celebrate a decade of “conscious consumerism” Bono will appear in Switzerland at a special event, but before jumping on a plane, the Financial Times caught up with him for a short interview in which he talks about the past decade of this wonderful initiative and the results they have had.

“Does conscious consumerism really exist?” he asks. “I think it does. I watch my daughters — they think about where they spend their money and they think about values. The consumer is changing … you have political power in your spending power.”

RED-branded products have generated more $350 million, which has gone to the Global Fund, a non-profit partnership dedicated to the eradication of HIV/Aids, malaria, and tuberculosis. The fund now disperses $4 billion a year, mainly from international governments. RED has been the biggest donor from the private sector, they say.

But RED’s success isn’t just about the money. “It’s not just about the money. It’s about engaging the companies that are partners and the people who work for those companies to learn about HIV and the opportunity to end the epidemic,” says Mark Dybul, executive director of the Global Fund. “When a CEO talks to an African head of state about HIV, it has a huge impact – much more than a global health person.”

Even Apple co-founder Steve Jobs was involved with RED, designing and selling a Red-branded iPod, and Apple has kept its connection with RED ever since.

Does Sir Jonathan think Red affected how companies think of corporate social responsibility? He demurs. “I’m much more interested in how a mother feels whose daughter is still alive than whether Red has had an impact on other companies.” He adds: “The thing that first struck me was that the magnitude and ugliness of the problem would normally be cause for people to turn away. I loved the way Bono saw it as a problem to be solved.”

The latest video from Mrwhosetheboss reveals some Samsung smartphones are suffering from a swollen battery issue. Samsung dealt with a Galaxy Note 7 fiasco in 2016, when batteries for the smartphone were catching fire worldwide. Now, it appears some older Samsung phones are seeing batteries swell up, even when off and in storage. The tech […]
Gary Ng
34 mins ago