Boston Dynamics robots might one day take our jobs, but until then, how about a dance party? 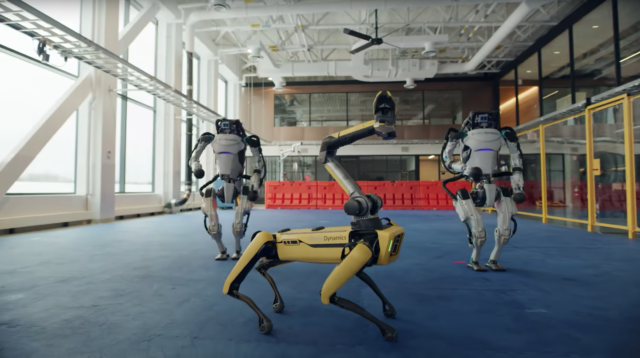 As we’ve all seen, Boston Dynamics robots can climb rough terrain, help doctors, and remind humans to maintain social distance protocols in public parks. We just got reminded the sophisticated robots can learn sophisticated choreography, too.

In a video posted by Boston Dynamics on Tuesday, the company’s machines — Atlas, Spot the dog robot, and Handle — dance in unison to the Contours hit tune “Do You Love Me.” Check out the video below.

The bipedal bots do the twist, Spot gyrates emphatically, and Handle wheels by in a routine seemingly too fluid to be executed by humans. Needless to say, viewers were impressed by the dance droids’ dynamic display, as the clip already has more than 5 million views in less than 24 hours, as of Wednesday morning.

Released as a kind of New Year’s gift from the company, the video is the first look at two Atlas humanoid robots working together. Atlas, still technically a prototype robot, has demonstrated a stunningly rapid evolution over the past decade from barely being able to walk in 2013, to being allowed to roam tetherless in 2015, completing a spectacular parkour routine just three years later, and finally getting acrobatic last year.

Spot on the other hand is the company’s only currently available commercial product, finally reaching the market earlier this year with a price tag of US$75,000. As well as rocking crisp dance moves the robot dog has been seen herding sheep in New Zealand, helping treat COVID-19 patients, and working on a Norwegian oil rig.

This isn’t the first time we’ve seen a Boston Dynamics robot gyrate its limbs to a catchy tune. Back in 2018, the then SoftBank subsidiary shared a video of Spot dancing to “Uptown Funk.” Watching the two clips consecutively highlights just how far the company’s robots have come in two short years.