Update 1: You can claim your copy via this link on Apple’s website. 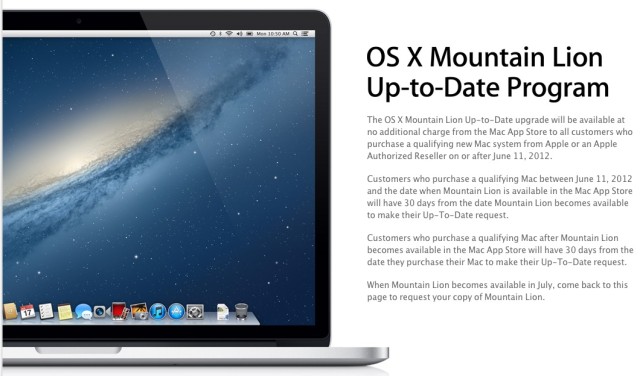 Did you purchase a new Mac recently, either on or after June 11, 2012? If you did, then you qualify for a free upgrade for OS X Mountain Lion, via Apple’s Up-to-Date program for free. According to Apple’s info page on their Up-to-Date program, customers will have 30 days from the date Mountain Lion becomes available to put in their claims. Users just need to enter their date of purchase, address details and serial number to qualify.

A keen-eyed MacRumors reader noted Apple’s claim page for the Up-to-Date program is now live and will enable users to receive their promo code to download Mountain Lion for free in the Mac App Store. The latest version of OS X is widely rumoured to be released this Wednesday, the day after their 2012 Q3 earnings call.

You can fill out the live form on the Up-to-Date claim page here.

Update 1: Some users have reported a 404 error after getting to the page where you submit your serial number. Some can’t even load the page anymore:

The server has not found anything matching the Request-URI. No indication is given of whether the condition is temporary or permanent.