Boxcar 1 Will Shut Down Service and Delete User Accounts on July 1, 2014

Boxcar founder and CEO Mickaël Rémond, also the new Tech Lead of the service, has sent a note to users via email the original service will be shutting down on July 1, 2014 and have accounts deleted: 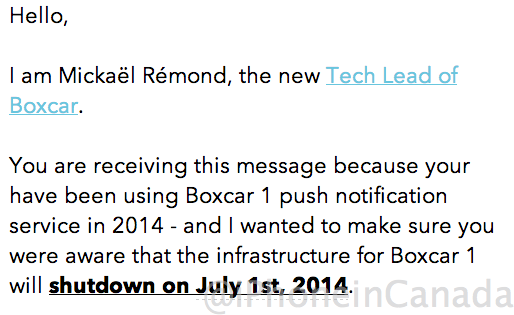 Existing users are being told to switch to the new Boxcar version, known as Boxcar 2 by downloading it from the App Store. The new version requires iOS 7 and has frequently received updates, 9 different versions since the start of this year.

Boxcar says its new service will require you to create an account, “as the platform is totally independent.” Boxcar 1 accounts will be automatically deleted once the infrastructure shuts down next month.

Boxcar is also reminding mobile developers they are offering a push notification service for iOS and Android that they can embed into their apps.

Rémond tells us the web preview for Boxcar 2 should be available in July.

Currently, Boxcar 2 doesn’t quite have all the functionality of Boxcar 1 yet, but we hope it can work and meet all the same functionality of the original service, which is (was?) one of the best ways to track your social feeds and more in a streamlined timeline.