The iPhone 4 is being released in Canada in “late July. Click here for more info.

After the incredible success of the iPhone 3G sales, A saavy iPhoneinCanada.ca reader earlier this morning emailed me a press release announcing a new iPhone 4G. Apple’s newest iPhone is scheduled to launch today, which brushed aside earlier rumors of a July launch at WWDC 2009!

A monumental leap for Rogers, and a sign that it is finally listening to its customers is the debut of what Rogers calls “Lifetime Contracts”. These new plans are intended to offer the best value for existing and new Rogers Wireless customers. Let’s skip the details and jump to the press release:

Sleek iPhone 4G in both 16GB/32GB models function as both business and social communications tool–yet, will also do your taxes.

TORONTO, April 1 /CNW/ – Rogers Wireless and Apple today announced the Canadian availability of the iPhone 4G–the device that will soon be named “The Best Device Ever in All of Mankind” by Wired and Time Magazine.

The sleek, minimalist design of the iPhone 4G optimizes the user experience inside and out with a revolutionary 4.5″ touchscreen. The life-altering multi-touch will allow you one touch access to email, the best internet on a mobile device, a full calendar, iPod, stock app, weather, oven timer, baby monitor, compass, and more.

Taking the Rogers Wireless Line Up into the Heavens

The iPhone 4G is the thinnest smartphone in Rogers’ extensive line up of innovative mobile devices, which breaks from our current offering of every single Blackberry, Samsung, or LG phone ever made. The iPhone 4G will offer Canadians a range of functions for both their professional and personal needs.

iPhone OS 3.0 Enables Your Life to Be Taken Over by the iPhone 4G

With 4G wireless technology that takes advantage of Canada’s largest and fastest network, Canadians will experience GPS mapping, support for daycare services like Microsoft DiaperChange, and the new App Store, which puts even more incredible flatulence apps at your nose tips.

And like the previous iPhone 3G, it combines three amazing products in one–a revolutionary phone, a widescreen iPod, and a breakthrough Internet device with fantastic rich HTML email and a desktop-class web browser.

But wait, there’s one more thing. Apple is also introducing the debut of iPhone OS 3.0, which adds a stunning extra 1000 new features to your iPhone. Now, you can spend even more time neglecting and ignoring your wife, children, family, friends, and pets at the dinner table, or any annual social event of your choosing.

“Canadians today live increasingly busy lives and the line between work and personal time is often blurred,” said newly appointed Rogers CEO, Madir Nohammed. “The iPhone 4G is a revolutionary device that proves technology does not have to limit personal time, but can rather enhance productivity. You wouldn’t believe it, but right now my iPhone 4G is back home baking a quiche in the oven and rearranging my furniture. It has changed my life.”

Rogers Wireless is also pleased to announce another first from Canada’s largest and fastest wireless carrier–the new Lifetime Contracts for the iPhone 4G. After years of consultation within the Rogers Wireless division, and to be dedicated to the legacy of former CEO and business titan Ted Rogers, the company has introduced the Lifetime Contract.

Available only exclusively for the iPhone 4G, the Lifetime Contract is giving customers what they want–and Rogers is listening. “I recently returned from a road trip that took me from Victoria to St. John’s. Canadians have been talking and I’ve been listening. They want extra value in their voice and data plans, and we’ve introduced that with our new Lifetime Contracts. Starting today, Rogers Wireless customers can now get the iPhone 4G for FREE, as long as they sign away to a Lifetime Contract,” explains Rogers Wireless PR Director, Elizabeth Jones.

“The Lifetime Contract adds incredible value. Not only will you get an iPhone 4G free of charge, your Lifetime Contract will be passed onto your family once you are gone. That means your future children, family, and other benefactors will enjoy the commitment you made to Rogers, and they will also pass it on to their children’s children as well. I believe it offers the best value ever from Rogers, ever. As for iPhone 4G voice and data plans? Those are still being finalized, and will be announced at an undisclosed time and location, in order to make the plans complex enough so that only 1% of Rogers employees will be able to explain them–while sober,” says Ms. Jones.

What: In celebration of Canada’s iPhone 4G launch today, select Rogers Plus stores will roll out the red carpet offering customers a special breakfast event (consisting of No-Name juice boxes, and Handi-Snacks) and a chance to win one of many Rogers Wireless prizes including hot-ticket Live Nation concert passes, t-shirts, music CDs, umbrellas, lanyards, paperclips, hair ties, toothpicks, and more.

We’re pleased to announce Vancouver as the host event of our iPhone 4G launch, as part of our partnership with VANOC and Vancouver’s hosting of the 2010 Winter Olympics.

Where: Rogers Plus Store, 2097 West Broadway, Vancouver, BC

All I can say is: wow. I just got back from the Rogers Plus store on Broadway (it was so COLD and dark outside!) and secured myself a NEW iPhone 4G for free (plus I won a couple jars of No-Name Chunky Peanut Butter, and a box of Sesame Snacks)! All I had to do was sign the Lifetime Contract, which was a no-brainer! My family is going to LOVE me! Here are a few pics of my new iPhone 4G: 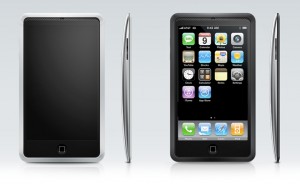 Anyone else see me in the line up? I tried to start a “Tweet Up” via Twitter, but nobody replied (I guess socializing with real humans in person instead of online is a better idea). Whatever, I got myself an iPhone 4G, now my life is complete! Anyone else score one this morning?