Wow! Did you guys see that announcement on TV by the Rogers representatives in Toronto? I still can’t believe the iPhone got announced today! I just read the short article on the front pages of the Globe and Mail and CBC News. Rogers stores have released the iPhone and the first one has already been sold. John Chow posted a review of his brand new Rogers iPhone here. (this link is part of April Fool’s, be warned for all you people who got your panties tied in a knot from this morning, hehe). He seems to be loving it! 😉

Anyways, if you didn’t hear about this announcement yet, this is some exciting news for all those who have been waiting for the iPhone to hit our shores! 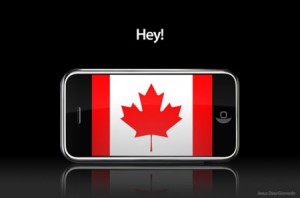 Okay, I know…that was pretty lame, but come on, I must have fooled at least a few of you out there! 🙂 I know some of your hardcore iPhone users just gaffed when you read my original post about the iPhone in Canada release date. My target audience was the first time visitor! I apologize if any harm was done in the creation of this April Fool’s Day prank. Sorry guys, I just had to do it…this post was supposed to appear at 9:30am, but the timestamp was set incorrectly.

“Okay, iPhone Fan, that Joke Really Annoyed Me…Do you have real news for us?”

The answer is YES! I am going to leave you with the following video to watch. It’s the upcoming “Pwnage Tool” developed by the iPhone Dev Team. If you haven’t seen this yet, it’s going to be great once it’s released. Currently it’s only availabe for Macs…the Windows version hopefully will come soon:

Wait! There’s more news: ZiPhone 3.0 Released!
Also, just to let you know ZiPhone 3.0 has been released! Some new enhancements include:

American Express Canada and Metrolinx have just enabled tap-to-pay functionality on eligible PRESTO devices for GO Transit and Union Pearson (UP) Express in the Greater Toronto and Hamilton Area. Cardmembers can pay for their adult transit fare with a contactless-enabled American Express Card, mobile wallet, or payment-enabled smartwatch. To make for a seamless experience, Cardmembers...
Usman Qureshi
44 mins ago