In a report circulated to clients today, Credit Suisse analyst Kulbinder Garcha has advised them to buy Apple stock (AAPL) ahead of 2017 iPhone “Supercycle”, while reiterating his “Outperform” rating and $170 price target on the stock, MarketsInsider reports. Shares of Apple have already climbed 24% this year to $143.69, with Garcha predicting more than 18% of potential upside in the upcoming months. 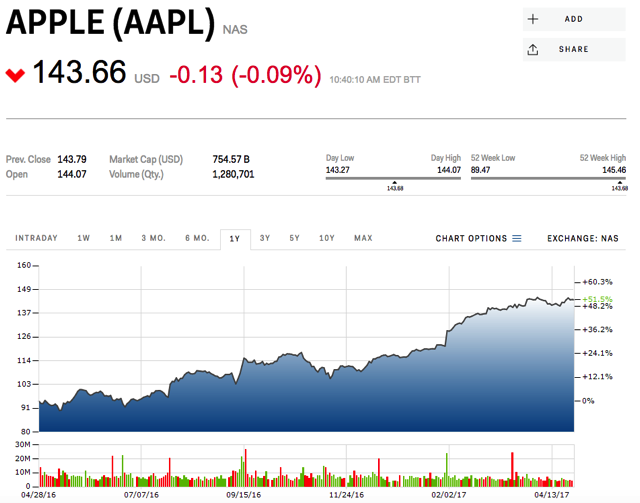 According to the analyst, the real reason to buy Apple stock is “the pent-up demand for a new iPhone with substantial changes”. He added that recent data points from the supply chain suggest that overall iPhone shipments “remain in line to ahead of expectations, with potential for a stronger mix”. He also referred to a March 10 report from Credit Suisse to explain why he believes the iPhone 8 will be a meaningful upgrade.

“Over the course of the next year, we continue to believe that an iPhone 8 Super Cycle (starting with 3 models, one of which will be OLED) should drive up replacement rates and drive new customers. This should result in iPhone volumes growing to ~265mn by 2019 from ~215mn in 2016”.

“The iPhone 8 is expected to have many new features. These new features include OLED, an iris scanner, laser auto-focus, a USB Type C connector, SLP (Substrate Like PCB), an L-shaped battery, glass casing, and a wireless charger—far more new elements than previous models”.

Garcha said that iPhone 8’s features will be far more compelling than those from other smartphone vendors, which he believes will drive the iPhone “Supercycle” with much faster upgrade.