The Canadian Automobile Association (CAA) in Manitoba wants new drivers to face tougher penalties if they are caught texting and driving, such as the suspension of licenses, urging similar consequences as driving under the influence of alcohol, reports the Winnipeg Sun.

CAA Manitoba president and CEO Mike Mager said “Those in the graduated driver licensing program have a zero tolerance for alcohol,” along with “To me, distracted driving is no different. It causes just as many deaths as alcohol. We’re asking the government to take a look at this.” 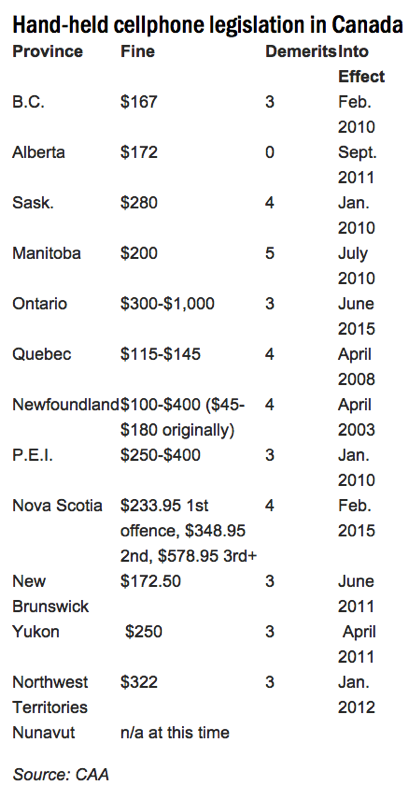 Manitoba Public Insurance (MPI) data reveals 38% of all collisions as a result of distracted driving were caused by new drivers in the graduated licensing program, from July 2010 to December 2013.

Provincial statistics note on average 28 people are killed annually due to distracted driving, with close to 2,500 distracted drivers part of collisions yearly.

According to a CAA poll of its members, 96 percent supported the idea of suspending licenses of new drivers caught texting behind the wheel.

Mayer continued to say “New drivers are at a higher risk of collision even before adding a cellphone to the mix,” emphasizing “It’s a recipe for disaster.”

Earlier this month, Manitoba implemented some of the toughest distracted driving laws in Canada, increasing demerit penalties to five points, along with the current $200 fine.

Mayer questioned whether the demerits will do enough to curb texting and driving saying “The government has been really good about adding more demerits, but is it enough?”

Distracted driving tickets have increased every year in Winnipeg since laws came into effect in 2010. Last year saw 5,136 tickets issued; as of June 3 of this year, 2,838 have already been given out.

What do think of this suggestion by the CAA in Manitoba?