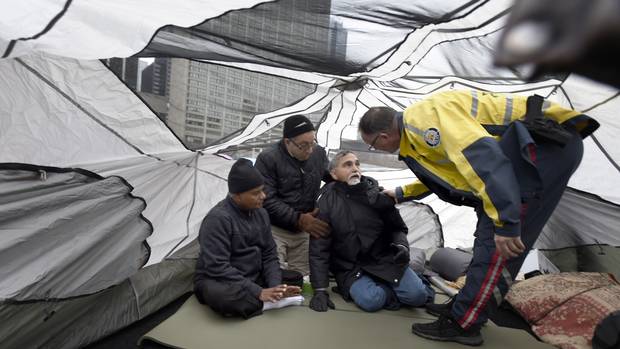 According to the The Globe And Mail, three Toronto cab drivers started a hunger strike at City Hall on Wednesday, to force action against Uber. The protestors initially vowed to eat nothing but water, but with police swooping in hours to dismantle their tent, the task became even tougher, leaving them shivering on mats in Nathan Phillips Square. “They’re not letting us set up a tent, so we would have to just stay here with the blankets over ourselves overnight,” said protester Danny Ryan at the time.

“They are supporting an illegal enterprise operating within Canada and … they’re taking the tent down to diminish our sustainability to stay here and continue our hunger strike.”

Earlier this week, the mayor had urged the hunger strikers to rethink their protest. “I’m assured that the officials are working on [the reforms] as quickly as they possibly can,” he said during a midday press conference.

“They are getting lots of encouragement from me to do it as quickly as possible, and I would just hope that maybe these drivers will reconsider the hunger strike, cause it’s not going to allow us to speed up the process of developing regulations.”

However, the protestors continue to brand Uber an outlaw that would drive them out of business, and when asked whether their fight rose to the seriousness of other causes that had employed hunger strikes, one protester said, ““John Tory is treating us as slaves. The mayor is supporting an illegal actor in this country”.

While the protestors vow to remain until their message has been heeded, Toronto Sun reporter Don Peat tweeted this morning the hunger strike had ended, with one cabbie taken to the hospital by paramedics.

Paramedics taking cab driver who was on a hunger strike to hospital #TOpolipic.twitter.com/xnedxgLHPj

Protests continued on after the hunger strike ended, as cabbies entered City Hall and chanted “Uber must go” and “Mayor must go”, as they marched around inside the building’s rotunda.