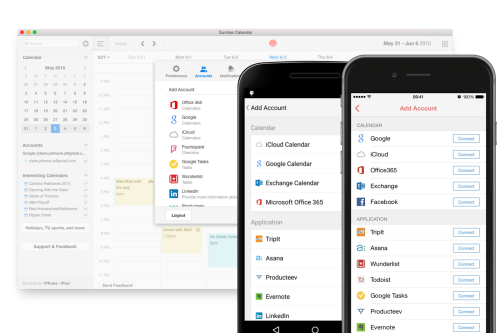 Now that Microsoft owns Sunrise, the sleek and social calendar app, it makes sense for the company to integrate it with Office 365.

“Sunrise now connects directly to Office 365 on Android, iOS and Desktop. Thanks to that, we’re making it easier than ever to see all of your events – work and play – in one calendar, accessible from anywhere.”

Sunrise now plugs directly into Office 365 on iOS, Android, and the desktop, giving you full access to all of your scheduled events under a single calendar. Microsoft says the added compatibility will help down the road as well, since there’s more flexibility to test features that will make the calendar work better with Office 365 applications.

“Because Office 365 is now fully integrated with Sunrise, we also have a lot more flexibility to play with new features and give you the best there is out there for all of your calendars. As an example, Meet will work way better with Office 365 than it did with Exchange, giving you more reliable availabilities straight from your calendar.”

If you use Exchange, the Sunrise support is only for iOS and Android at the moment. The company has not said when the desktop app will support Exchange soon. Either way, it is great news for those who use the service.

Sunrise Calendar for iOS is available as a free download from the App Store. The app requires any device running iOS 8.0 or later and has been optimized for the iPhone 5, 6, and 6 Plus.

Amid the tools used by archaeologists for centuries i.e. trowels, buckets, brushes, and pickaxes, there’s a new piece of equipment, the iPad Pro, as highlighted by Apple in a new feature. “iPad is the perfect archaeology machine,” says Tulane University professor Dr. Allison Emmerson. who was part of the team that pioneered its use to...
Usman Qureshi
13 mins ago

Apple’s Stage Manager multitasking feature in iPadOS 16 is only for tablets with the company’s M1 chip, but that is now changing. According to Engadget, Apple told the publication Stage Manager is now expanding to older iPad Pro 3rd gen and 4th gen models when iPadOS 16 is released later this year. M1 iPad Pro […]
Gary Ng
57 mins ago