iOS 14’s new call recording feature, which was spilled by a leaked screenshot earlier this week, was designed for internal debugging and will not be made available to the public, according to a new report. 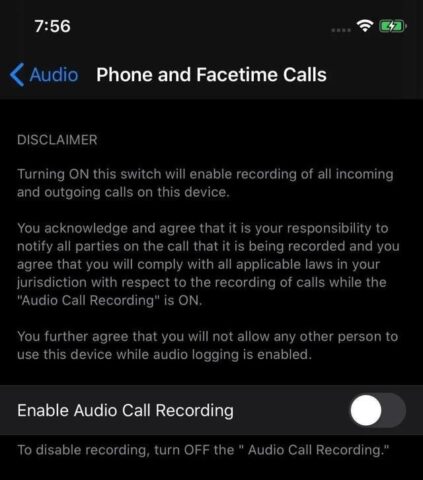 9to5Mac reports that the feature, which was gleaned from a highly questionable image allegedly scraped from an early version of the software update, does indeed exist, it’s highly unlikely to see the public eye.

“We’ve heard from Apple engineers that the feature has been present in iOS internal builds and it’s only intended for debugging purposes,” reads the report. “In other words, that’s a dedicated option for Apple employees, and it won’t be made available to users.”

The report goes on to mention that this explains Apple’s notice within the leaked screenshot, aimed at Apple employees, which reads: “You further agree that you will not allow any other person to use this device while audio logging is enabled.”

Of course, none of this can be confirmed yet, but as the publication points out, iOS does contain several features that are meant to be used internally for testing and debugging, so it’s not surprising to see this feature appear, even if it wasn’t intended to be used outside of Apple to begin with.

iOS 14 will be officially introduced at WWDC 2020, beginning June 22, as well as the next major releases of macOS, watchOS, and tvOS.