The much anticipated Camera+ 8 has finally hit the App Store, with an innovative slow shutter feature supporting effective shutter speeds of as long as 30 seconds. This will allow you to capture those amazing, misty, creamy waterfall photos that you see in magazines, using your iPhone camera. And you’ll be able to do some creative night photography as well. 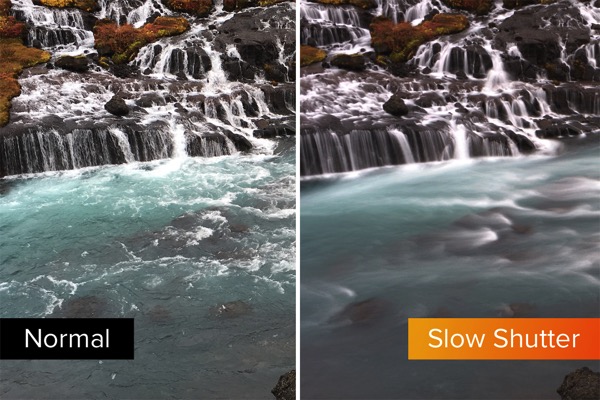 Just as with any other camera, to get the most out of your slow shutter photography, a tripod is pretty much essential to prevent taking blurry shots. But the results can really be worth that little extra effort. You’ll know that you’re in the extended shutter speed range when you’re shooting in Shutter Priority or Full Manual mode and the exposure mode indicator changes from S or M to S+ or M+, respectively.

Working hand-in-hand with the new extended range of shutter speeds is an extended range of effective ISO values. With this range, you’ll be able to get down to unbelievably low apparent ISO values to make it possible to take long exposure photos without having to resort to using things like ND filters to prevent your photos from blowing out.

We’ve added a couple of import options to help you get your latest photos from your Photo Library and into your Lightbox. Now you can easily import the last photo you shot… and you can even import your whole last moment with just a couple of taps.

When you have a share sheet open in an app, those square, rounded-cornered, monochromatic icons in the bottom row are called Action Extensions.

There’s a new option for the Notification Center Widget that enables you to quickly import photos from your Photo Library to your Lightbox.

And finally, there’s a new “What’s New” section in the menu to make it easy for you to see what’s new. You can grab the update using the following App Store link:

Today Apple announced its Q1 2023 earnings, reporting $117.2 billion in revenue and net income of $29.9 billion for the December quarter. Revenue was down 5% year-over-year, affected by production disruptions in China due to COVID-19. Apple CEO Tim Cook told Reuters in an interview that production disruptions are essentially over, as they “lasted through […]
Gary Ng
47 mins ago